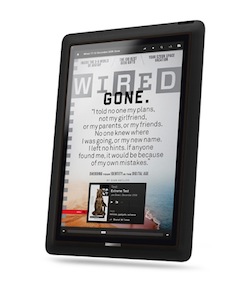 Condé Nast, the publisher behind GQ and Wired magazines, is close to a deal to begin selling its magazine issues on the iPad for $2 each and will offer yearly subscriptions for $20, a source familiar with the matter told the New York Post.

The publisher will begin releasing versions of its New Yorker magazine first with coverage of Osama bin Laden’s death to generate some additional buzz for its iPad magazines. The iPad editions are expected sometime next week, according to the New York Post. It also means the costs of Condé Nast’s current iPad publications will fall considerably — its Wired app currently costs around $4 per issue, and its GQ app costs $5 per issue.

The iPad also offers a few extra bells and whistles for magazine publishers that want to add some interactive content to each publication. Publishers can include videos, high-resolution pictures that readers can zoom into and interactive menus and games to further enhance that content. But all of that inevitably drives up the price of the publication because it requires more manpower and technical know-how — specifically, how to program an app on an iPad — that publishers did not need before the advent of the iPad and other tablet computers.

Whether those new price tags will be sustainable is another story altogether. Condé Nast will open its content up to a massive audience — Apple has sold more than 15 million iPads since the tablet computer was released. But the costs of producing the content might not be met with revenue from the publisher’s iPad app.

A lot of publishers have turned to the iPad as the next evolution of print magazine-style publishing, but none of them has really knocked it out of the park just yet. The iPad versions of each magazine usually have steep price tags — at least, when compared to other apps on the Apple App Store. The new price tags would drastically undercut that — which is the shelf price for each normal magazine — but would open the content up to more casual readers.