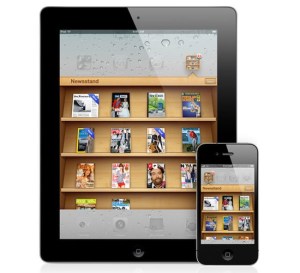 Newsstand is essentially a collection of iOS applications from print publications. Newsstand appears as a separate folder on the iOS 5 home screen that houses each publication’s app. The app automatically downloads new content and sends users a notification when it’s available. Some of the 295 publications participating in Newsstand include the New York Times, Popular Science and National Geographic.

Nine of Condé Nast‘s publications — Allure, Brides Glamour, Self, GQ, Golf Digest, The New Yorker, Vanity Fair and Wired — are available through Newsstand. And while total digital sales are up, so are single issues sales, which have increased by 142 percent compared to the previous eight weeks, the company said.

Based on the current success, Condé Nast is planning to launch another three titles through the app store in early 2012. Those titles are Condé Nast Traveler, Bon Appétit and Vogue.

For Apple this marks a definitive success without exerting much effort. It seems that the only thing holding back the transition of digital magazines and newspaper subscriptions was the lack of visibility. However, with iOS 5, this issue has been resolved. Users cannot “hide” the Newsstands app in another folder, and thus, are forced to acknowledge it (and possibly even use it).

Have you used Apple’s Newsstand to buy a digital newspaper or magazine?