Video streaming is soaring as COVID-19 quarantines have people turning to movies and TV series to pass the time and ease their sense of isolation, according to a new study.

The report by Conviva, a streaming media research firm, disclosed that video streaming by consumers around the world grew 20% in March, including a 26% increase in the U.S. In what may be a sign of just how much the quarantines have disrupted daily routines, the report found the biggest surge in viewing came during the day, with streaming up 40% between 10 a.m. and 5 p.m.

“The last three weeks have dramatically changed how we work, socialize, and interact,” said Conviva CEO Bill Demas in a statement with the report. “As we all adjust to the new normal, streaming and social video have become even more important to many American households.”

Conviva partners with many of the largest video services and has its monitoring technology deployed in more than 3 billion streaming video applications. That gives the company a pretty robust view of habits. For this report, the company analyzed data between March 3 and March 23 and compared the numbers in that final week to the two weeks prior to measure changes.

As part of the shift, the company said early morning viewing rose 26% and early evening viewing increased 20%. The classic prime time viewing window of 8 p.m. to 10 p.m. saw a drop of 2%.

There was a fair bit of variation. Africa saw an increase of 33%, while Europe saw only a marginal increase of 2.2%. That may suggest concerns over streaming services burdening the continent’s internet infrastructure have been overstated. In response to requests from the European Commission, several streaming companies have lowered their bitrates to ease their impact on networks.

Meanwhile, Asian markets, which tend to be mobile-first when it comes to video streaming, experienced a 10% drop as more people stayed at home, according to Conviva. 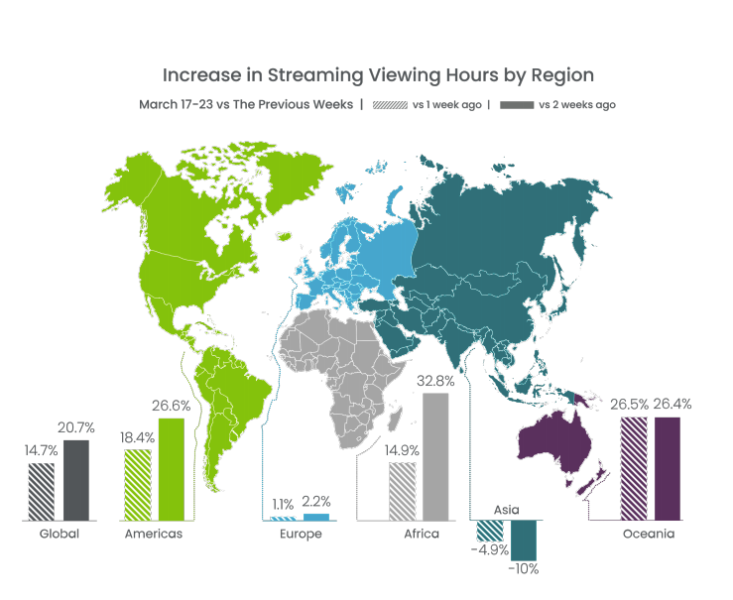 Conviva also tracked engagement with social media and local news as part of the report, which analyzed more than a thousand news outlets on social media and compared trends during the 30 days ending March 23 with the 30 prior days.

Video of views for local news organizations on Facebook grew 247% during that window, with the number of views per video jumping 118%. During that same time frame, national news organizations saw an increase of only 97% on Facebook, an indication of just how much consumers are searching for information that is more geographically relevant, given the different rates of outbreaks and quarantine policies.

As with other dramatic changes imposed by COVID-19, it remains to be seen how many of these trends will hold up after the crisis ends. It seems unlikely that so much daytime video viewing could continue, for instance, once people return to work and school.

Still, the report suggests that video streaming platforms are likely to see a long-term bump as viewers become more dependent on them.

“While the circumstances are unique and the shifting prime time is surprising, the streaming growth is not,” Demas said in his statement. “We anticipate streaming providers will retain new viewers long after the coronavirus crisis has ended, as viewers embrace the variety and flexibility of the medium.”