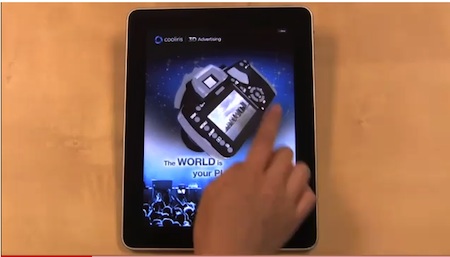 Specifically, Cooliris has created new “immersive 3D ads” for the iPad. You tap on the banner ad, which then opens into a 3D product demo that you can rotate using the iPad or iPhone, or into some other interactive ad. (Bhumkar emphasized the idea of immersiveness over 3D, since not all of the ads are 3D.) The idea is to take advantage of the iPad to deliver an ad that users are really engaged with.

Cooliris will run these 3D ads within its own LiveShare mobile app, but it also recently announced that it’s partnering with mobile ad network InMobi to make the technology available to InMobi advertisers. (The two companies will share the revenue.) Bhumkar said he’s open to working with other ad networks eventually, but he’s happy to launch with InMobi — the ad network was on board with Cooliris’ desire to make the technology available as soon as possible.

Cooliris’ Immersive 3D Ads will go live in April, but the company just sent me the demo video below to show them in action.