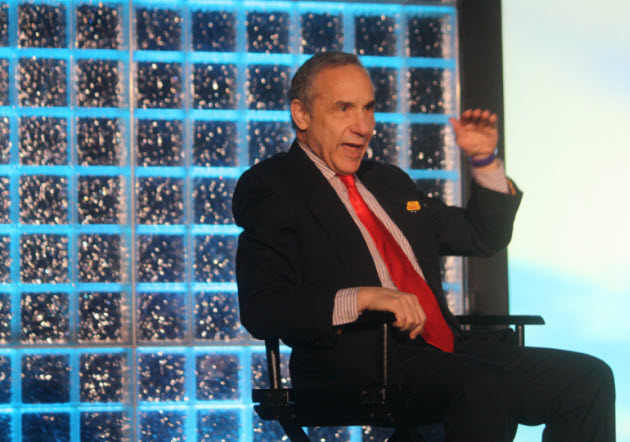 Most film makers aren’t encouraging digital pirates to illegally copy their works. But Lloyd Kaufman (pictured above) isn’t your usual film maker. The controversial movie maker has been making low-budget, exceedingly gory, vomit-filled and highly sexualized horror movies since the 1970s under the Troma Entertainment brand.

Kaufman (@lloydkaufman) is still making films that appeal to cult movie fans, including the upcoming Toxic Avenger 5. And he said he doesn’t mind at all that others have taken his films and pirated them. His talk at the MI6 game marketing conference showed that the interests of indie artists are often at odds with the mainstream media conglomerates and that these artists are often more adept and creative when it comes to embracing new technologies.

“We are not so much against piracy, ” he said in a conversation with Frank Radice (pictured below, right) of Definition 6 on Thursday in San Francisco. “There is a lot of economic blacklisting going on because big media conglomerates control all of the distribution and the means of getting information. But social networking helps us get our message out and piracy also helps us. We’re in business because a lot of people pirate our movies. They’re sharing, not stealing. That’s OK.” 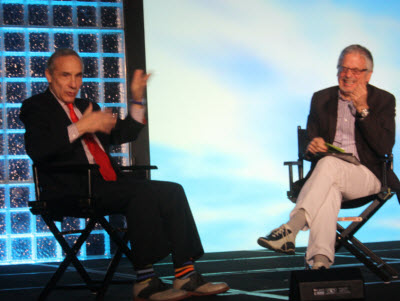 The discussion, ostensibly about guerrilla marketing, was freewheeling and full of jokes. Kaufman said his classic 1984 The Toxic Avenger film (where a 15-year-old kid gets run over by a car and then, as the car backs over him again, gets his head squashed) is being remade with a $100 million budget.

Radice said, “Sounds to me like you sold out.” Kaufman replied, “I’ve been trying to for many years.” Kaufman said that Toxic Avenger The Musical is coming to Broadway after students made their own musicals based on the film. Some students wrote to ask him if it was okay for them to stage a musical based on the films, and he said yes.

“We gave the rights to Toxic Avenger the Musical to students in Portland, Oregon, who had no money to pay us. I figured this was good publicity for our DVDs,” he said. “Another group in Omaha did the same thing. They attracted the Broadway guys. It was a gift of piracy….Otherwise, how are people supposed to know about it?” 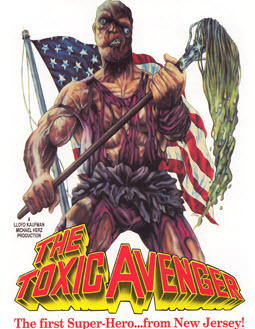 The conversation had its serious points. Kaufman said that when people take a copy of his work and make their own version of it, he considers that to be sharing, not piracy, in contrast to the views of major motion picture studios. That sharing often leads to greater awareness and better deals over time.

“Let the pirates have fun with your stuff,” he said. “As long as they are not charging, it keeps you in the public eye. It’s a disgrace that millions of young teenagers are being classified as criminals. What kind of society is that?”

Kaufman added, “Copyright law has to be changed. Disney can make millions off of Mickey Mouse. But maybe there will be a William Shakespeare out there who takes Mickey Mouse (adapts it) and makes Romeo and Juliet out of it. Shakespeare himself plagiarized. He took an Italian play and made the greatest romance that has ever been written. Imagine if copyright law was around then. We wouldn’t have had Romeo and Juliet, and then we wouldn’t have Tromeo and Juliet,” a Troma film.

He noted that Cannibal! The Musical, an indie film (with a lot of partially eaten dead people) created in 1993 by South Park co-creator Trey Parker, has never been on TV or any form of American broadcast TV, yet Troma has sold more than 400,000 DVDs of the film, largely through web marketing and, more recently, through social media.

Kaufman is chairman of an association representing the independent movie industry and has testified in favor of Net Neutrality. He favors policies whereby the owners of the internet’s distribution networks (such as Comcast, Verizon and AT&T) should not be allowed to dictate what can or cannot be allowed to pass through the distribution to consumers.

“There is no question that Net Neutrality on the internet is the main reason that we are still here,” Kaufman said.

Mainstream media conglomerates are trying to “colonize the internet,” and “we all know that colonization doesn’t work. Just ask he French,” Kaufman said. “They are trying to build a superhighway on the internet for themselves and leave everyone else on the dirt roads. The media conglomerates don’t want to get up in the morning and compete. If we all wake up in the morning and look at cats on the internet, no one is going to watch the latest Adam Sandler movie.”

Asked if the music industry should have embraced file sharing services such as Napster, Kaufman said, “I don’t think that Metallica did itself any good by suing little fat kids in their basements blogging about X-Files. I don’t think it was a good move for Warner Bros. to sue kids who are making fan films about Harry Potter. They have to embrace the new technology. That’s the way to get around it.”

Check out a small portion of the video of the talk below.