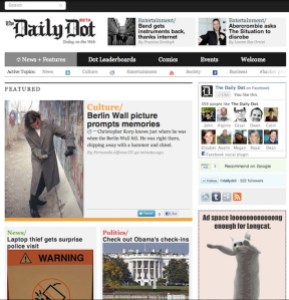 The biggest hurdle to enjoying The Daily Dot, a fun new online news site that launches today, is that its premise is based on a bad metaphor: The Internet is a community and The Daily Dot is its local paper.

The Daily Dot is an online-only news outlet that reports on the colorful goings-on in virtual “communities” such as Reddit, Tumblr, 4chan and Twitter. The startup was founded by serial entrepreneur Nova Spivack and CEO Nicholas White, formerly of Sandusky Newspapers. To direct editorial content, they brought former VentureBeat editor Owen Thomas on board as founding editor. (I have no personal connection to Thomas.)

In lieu of traditional datelines, The Daily Dot kicks-off most articles with the icon of the community it’s reporting on, such as Facebook or Twitter. Content is organized similarly to a real local paper, with general categories that include News, Entertainment, Culture, Business and Politics. There’s a comics page that features a handpicked collection of comics from around the web. 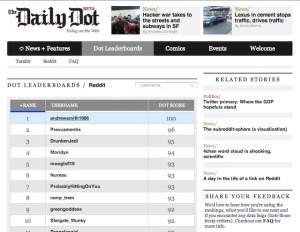 One thing that small town papers offer that the New York Times or Washington Post don’t is the chance for locals to see their name in an article. The Daily Dot recognizes this and plays it up with its Dot Leaderboard Profiles page (seen on the right), which shows rankings of the most popular people from the various online communities.

So far The Daily Dot has raised just under $600,000 in funding from media investors and executives, with commitments for more if needed. The staff of 25 people, 13 of whom are editorial, are dispersed across the U.S.

The Daily Dot isn’t just aggregating or highlighting the most popular online stories, posts, trending topics or videos of the day. Its reporters pick up the phone (or send the Direct Message, as the case may be) and contact the people involved to get the real story. The Dot’s Writers are applying traditional newspaper reporting techniques, and all the who, what, when, where and why that it entails, to narratives that often take place entirely online. Many of the resulting articles are great, engaging reads that other outlets would have missed. For example, one of its early articles was an obituary of a contributor to Etsy Bitch — someone whose passing might have gone unnoticed outside the small circle of Etsy fans and critics who read that blog.

The Daily Dot also did a good profile of the family behind a viral YouTube video that showed a little girl dancing with a dead squirrel. “We called up the parents and asked them what they were thinking. And it turned out they had a really good story,” said Thomas. “It kind of changed their life. They were living off the grid, raising their daughter without internet access in their home. Now the mom is a YouTube microstar.”

Some early articles seem forced: Not every viral YouTube video needs a back-story or every Reddit fight a followup. But The Daily Dot’s approach is admirably ambitions, and will probably be hit-and-miss while it finds its footing. Once you give in, the content is entertaining and the layout attractive. The site design is graphic-heavy and inviting, with an ample amount of cats in true Internet style.

Some of The Daily Dot’s reporting may seem familiar to fans of Tosh.0, a comedic TV show that summarizes things happening on the Internet. It features a reoccurring bit where the host tracks down the stars behind viral videos and interviews them. The Daily Dot wants to take that one-note joke, go deeper, and apply it to the entire Internet.