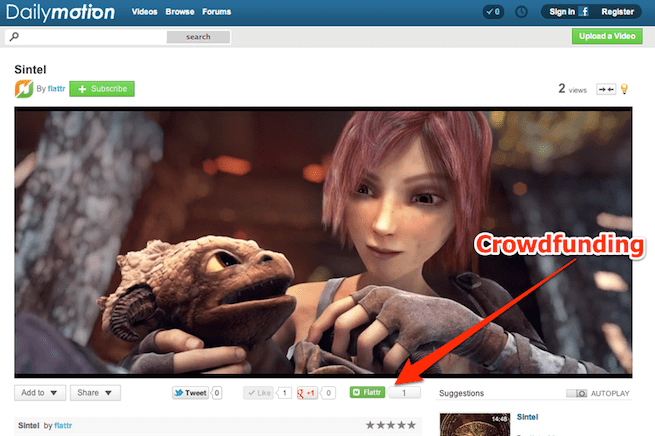 Creators wishing to distribute their video content online for consumption by the masses have plenty of services to choose from, but the same isn’t always true for getting compensated for the work. Fortunately, web video site Dailymotion thinks its found a winning solution through a new partnership announced today with crowd-funded micropayments service Flattr.

“Not only is this a great way to compensate video creators, but it [Flattr] will help democratize the way content is being monetized,” Dailymotion U.S. Managing Director Roland Hamilton told VentureBeat.

Flattr is the genius idea of Pirate Bay co-founder Peter Sunde and Linus Olsson that allows for virtually any thing on the web to receive crowdfunding by clicking a “Flattr button” associated with a particular project, piece of content, software, or service. Flattr works by having users set up an account that they can add monthly donations to, which ranges from a few bucks to several hundred dollars. Flattr users then use the web as normal, clicking Flattr buttons whenever they find something worthwhile. At the end of the month, the total donation in a person’s account is divided up equally based on how many times you clicked the Flattr button. The funds are then distributed accordingly.

“Most people create content and hope they will make a living on it, but get little or no money,” Olsson told VentureBeat. “Flattr may not be a main source of income, but maybe it’s enough to buy a new camera or microphone… or even just some beers for their fans.” He added that those small improvements can be just as important for creators.

As part of the partnership, video creators that belong to Dailymotion’s Motionmakers’ program – the site’s premium content hub for users to upload their own HD content – can now embed a Flattr button on their channel page as well as on each individual video page. The Flattr button is only accessible via the website, but Dailymotion said its working on adding functionality for mobile devices, Xbox Live apps, and embedded videos in the future. Flattr will split its regular 10 percent transaction fee for Flattr donations with Dailymotion.

I’ve been intrigued by Flattr since its beta launched in 2010. Flattr adapts the concept of clicking Facebook’s “Like” button (or Digg’s digg button, Twitter’s retweet, StumbleUpon’s stumble, Reddit’s upvote arrow, etc.) and turns it into something that matters every day. Most social news aggregators offer a reward in the form of increased visibility through popularity. Honestly, I can see how most people would become apathetic to clicking buttons every day, especially after the promotional benefits are exhausted. With Flattr, you actually have a reason to continue clicking because it’s putting money into the pockets of people who create stuff you care about.

Flattr’s Olsson told me that the micropayment service is primarily used to fund people working on open-source software and news blogs, but the partnership with Dailymotion could help push crowd-funded video content the forefront for Flattr donations. Dailymotion brings in 114 million unique visitors per month that generate over 1.5 billion video views, according to a recent comScore report.

The new Flattr integration may provide some creators with an incentive to host their content through Dailymotion rather than other video sites. YouTube, which is arguably the biggest home for video creators, only offers advertising partnerships to generate money on videos hosted on its site. If you don’t get a massive number of video views every month, you’re probably not even going to see a paycheck — even if a small number of people are extremely enthusiastic about your videos and willing to pony up obscene amounts of cash to see more of it *ahemFirefly*. At least with Dailymotion, you can now set up a tip cup next to a person’s monitor to compensate for the lack of major advertising potential.