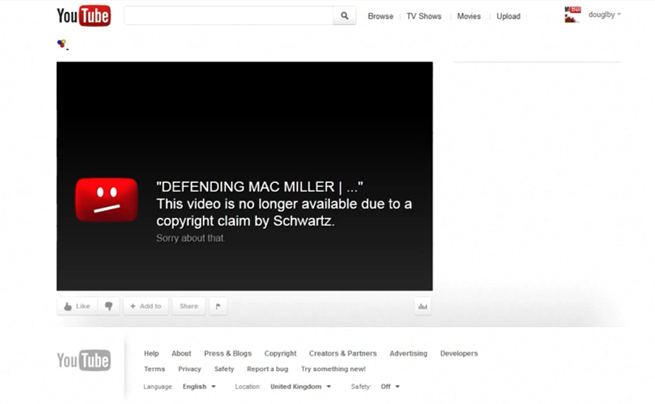 What happens when people who protest about copyright law are silenced by copyright infringement claims? YouTube rapper and commentator Dan Bull believes this has happened to him, so he’s taken to YouTube to document his experience.

The case begins with rapper Lord Finesse suing Mac Miller for $10 million for using the beat from “Hip 2 Da Game” without permission on a mixtape track. Bull, a rapper in his own right, created a YouTube video to call Finesse a hypocrite because Finesse’s song samples jazz musician Oscar Peterson. Bull’s video also uses the beat from Finesse’s “Hip 2 Da Game,” but he claimed he could use it under “fair use” because it is acting as commentary or parody. “Fair use” is what allows you to watch those endless “Call Me Maybe” parodies or lets sites like VentureBeat post small amounts of copyrighted works without asking permission.

But YouTube has taken down the video Bull uploaded because Lord Finesse claimed copyright infringement on it. (Watch the re-uploaded video here.) Bull’s video views and all the comments he received are gone now, and he doesn’t want to take the case to court because it could be costly. “Copyright law is being used to silence criticism of copyright law,” Bull says in the video.

So to help explain just what happened and why he’s upset with what Finesse is doing, Bull created an eight-minute video that helps show the alleged hypocrisy and act as a warning to others about how fair use may not protect your original videos from being taken down by copyright claims.

“I have fought ACTA, SOPA, DEA and various other forms of censorship in the name of copyright,” Bull writes in the video description. “I will not be silenced by this kind of abuse of the copyright system. The DMCA is not supposed to be used in this way.”