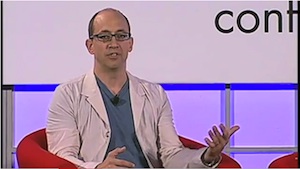 Want to understand of how Dick Costolo, who was named Twitter’s chief executive on Monday, plans to build a business? The video below is a good place to start.

Costolo’s interview with Ad Age editor Abbey Klaassen took place last week at the Mixx advertising conference. Costolo was still chief operating officer, not CEO. But Ad Age only posted the video on YouTube a few days ago, and All Things Digital’s Peter Kafka pointed it out today.

Given the conference and the interviewer, it’s no surprise that the main topic was advertising. Twitter’s lack of a business model is a constant joke in the tech press, but Costolo said the messaging site’s ad model has now moved beyond the experimentation stage.

“We feel like we’ve cracked the code on a new kind of advertising,” he said. He later added, “In all of our advertising products, what we’re trying to do is not say, ‘Here’s the content, here’s the ads.’ What we’re trying to say [is], ‘This is organic content that people like. How can we take this thing that’s organic and enhance a company’s ability to communicate with their customers?'”

Twitter has worked with more than 40 advertisers to date, Costolo said, and plans to reach the “low hundreds” by the end of 2010. It will eventually launch a “self-serve” platform where advertisers can pay to promote tweets, trends, and accounts without any negotiation or hand-holding with Twitter.

Asked whether he could see a day when brands might spend millions of dollars on Twitter advertising, Costolo said that will happen in the “very very near term.”

“It’s going to be very easy for us to have a significant enough distribution for you to spend as much money as you want to spend with us,” he said.