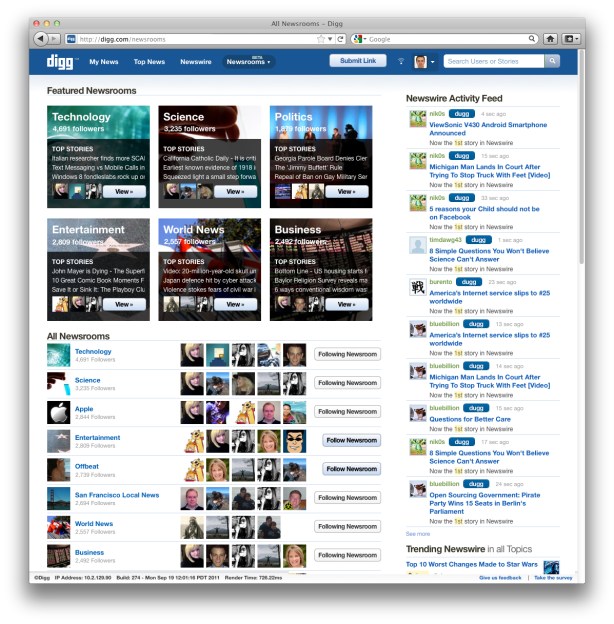 Here’s how it works: Digg takes content from a number of sites it curates, such as tech news blogs and news sites, and adds it directly to the “Newswire” in each Newsroom. Digg ranks those stories by how new they are and how much of a “signal” they have — which is a hodgepodge metric derived from the number of times readers have Tweeted the story and shared it on other sites.

Digg users then vote up or down the stories on the Newswire as they see fit. More popular stories appear on the front page of the Newsroom for typical readers. Digg users who discover interesting stories through the Newswire earn points and reputation badges that help them reach the front page more often. It’s a way of rewarding power users who add positive content to the site, Digg chief executive Matt Williams told VentureBeat.

“There’s way too much for me to get my arms around on a daily basis,” he said. “The focus on Newsrooms is to bring forward the most relevant news as measured across popular opinion and refined by top contributors across Digg.”

That reputation system is also designed to discourage “gaming” the site, where social media promoters take advantage of the Digg’s algorithms to artificially promote certain stories and drive traffic to sites, Williams said. A combination of the transparency on the site — for example, you can see all the top contributors for a newsroom on the side of the site — hard-to-obtain badges, and a required verified identity (like Facebook connect) should prevent artificial promoters from gaining a foothold, he said.

“At launch, and then over time, there are a number of things we’ll do that will thwart nefarious gaming and let the real contributors have all the fun,” he said.

While Newsrooms will be a major focus for Digg moving forward, the site is not abandoning its typical “top news” stream that includes content everyday Digg users submit and vote up organically. The Newsrooms are entering a closed beta starting today, Williams said. Digg has been working on the feature for the past five months.

A large number of Digg users migrated over to competing news aggregator Reddit after Digg’s fourth design revision. The site has spent a lot of time trying to earn those users back by bringing back popular features like the “Bury” button, as well as taking other steps to differentiate itself from Reddit. Digg still has around 17 million monthly unique visitors and 1 million daily unique visitors. Reddit also includes subcategories for content — such as Technology, which also appears as a Newsroom on Digg — but they are not automatically curated.

“If you look at music, who was popular last year, it was Rebecca Black, and that sucks — not many people actually want to see that,” Williams said. “I think we’ve found an interesting way to separate out what’s most meaningful from popular.” 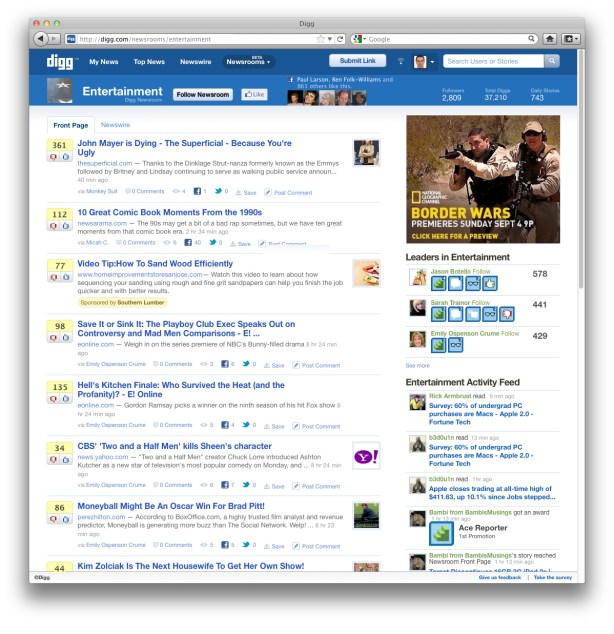