Disney’s streaming video service Disney+ was destined to be one of the year’s biggest releases the moment it was announced for a November 12, 2019 release. Now the service is live in the United States, and though it’s facing the sort of early speedbumps encountered by a restaurant packed with people on opening night, it’s already putting to shame Apple’s launch of Apple TV+ at the beginning of this month.

For $7 per month, Disney+ offers users access to hundreds of movies and TV shows spread across five categories: Disney, Pixar, Marvel, Star Wars, and National Geographic. While the Disney collection looks somewhat like the cable Disney Channel, all of the content is available on demand, including multiple seasons of past and current TV shows, plus decades of popular Disney films. Pixar’s collection of computer-generated films and shorts, virtually every Star Wars film and TV show, and most of the Marvel cinematic universe can be streamed, as well.

Early adopters are being treated to some surprises. On a positive note, if you’re using a 4K display on a high-bandwidth connection, you can experience all of the Star Wars films remastered in 4K resolution with cinema-quality audio. Moreover, the day one scope of the service is staggering: Disney+ has launched with the aforementioned catalog content, plus Fox movies (Avatar) and TV shows (The Simpsons), and its own original programs. Episode one of the Star Wars spinoff The Mandalorian is available now, as are The World According to Jeff Goldblum, Pixar in Real Life, and Marvel Hero Project, plus movies such as The Imagineering Story and Noelle.

Although Disney recently released a video spotlighting the service’s day one content, it used a deliberately overwhelming format, such that viewers are just now discovering some of the library’s gems. Obscure cartoons such as 2011’s Tron Uprising and 1979’s Spider-Woman are joined by Pixar’s library of brief “shorts,” plus National Geographic documentaries and animal shows, including Dr. Oakley: Yukon Vet and The Incredible Dr. Pol.

For the time being, new Marvel shows such as Loki, WandaVision, and Falcon and the Winter Soldier are nowhere to be found on the app. Each of these programs is slated to launch in the months to come, with new episodes appearing once per week rather than in binge-ready dumps of content. Disney has already announced a huge collection of new series to keep the streaming service relevant, relying heavily on Marvel and Star Wars characters to win subscribers. 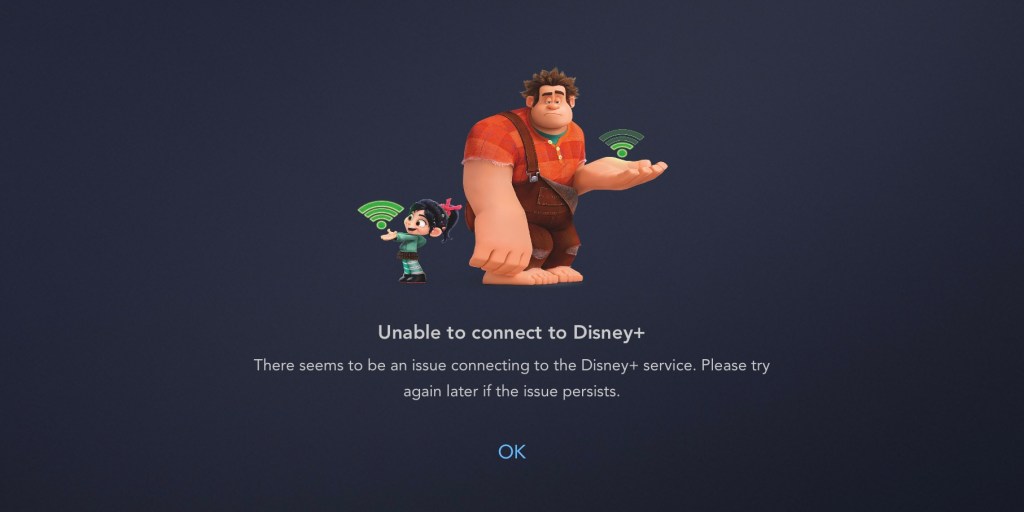 Less positively, the service’s client apps — which to Disney’s credit launched simultaneously across numerous popular platforms, including Android, iOS, game consoles, and smart TVs — are intermittently throwing up “Unable to connect to Disney+” error messages and denying users access to sections of the content. As of press time, error messages initially came up when attempting to access certain parts of the iOS and Roku apps, though they appeared to be clearing up, a situation that may remain in flux as first-time users log into their accounts.

Coming a year and a half after Disney began working on the service, today’s launch of Disney+ offers a marked contrast with the November 1 Apple TV+ launch. Apple released its subscription service for $5 per month with only a small amount of content — a handful of original shows, plus one movie — and no catalog of past videos, relying on stars such as Oprah, Jennifer Aniston, and Jason Momoa to attract audiences. While Apple TV+ arrived in 100 countries at once, reviews of the new shows were largely mediocre, and the entire library could be consumed in its opening weekend. Apple has given away one-year subscriptions to buyers of its Apple TV, iPad, iPhone, iPod touch, and Mac devices.

Disney is offering a seven-day free trial of Disney+ to new users before the $7 monthly charge starts, with the option of an annual $70 bundle to save a little money. To encourage further subscriptions, the company temporarily offered a three-year commitment discount to its D23 members and has partnered with Verizon to offer one year of free service to some wireless customers. So far, Disney’s content — new and old — has received rave reviews, suggesting that the service will have long legs as a streaming video option alongside established players such as Netflix. As of today, the service is available in the United States, Canada, and the Netherlands, and it will expand to further countries in the coming weeks.