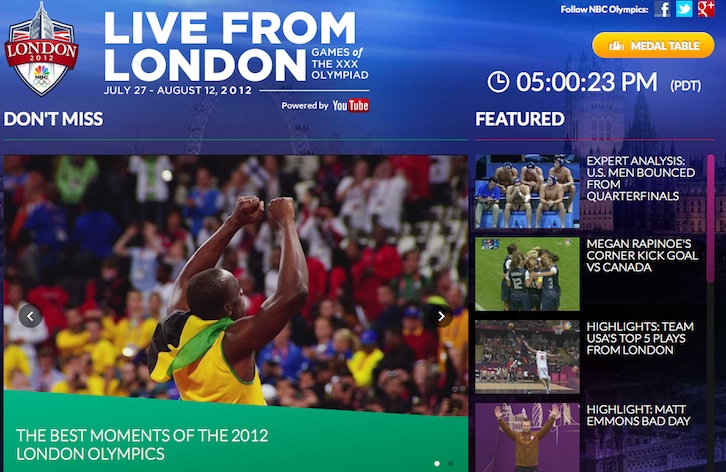 I get it. The Olympics are incredibly expensive to produce and broadcast. I shouldn’t expect to be able to watch it the way I want to, when I want, absolutely free.

I haven’t found a Flipboard for TV that somehow magically lets me skip past any paywalls and reformat the world’s most valuable media property for my iPad’s convenience. It probably doesn’t exist, and for good reasons.

Still, NBC had a huge opportunity to cash in on the rising wave of Internet media, and it blew it.

NBC paid $1.18 billion for the broadcast rights in the U.S., including Internet broadcasting. Through a partnership with YouTube, it offered 3,500 hours of live Olympics coverage in HD for free — but with a big catch. You had to be a paying subscriber to a cable or satellite TV service that includes NBC.

That irritates cord-cutters like me, who don’t like paying top dollar for a hundred channels of crap just to get the one or two shows we’re actually interested in. I’d rather pay a few dollars a month and wait for the shows to appear on Netflix, thank you very much. (Or find some kind of workaround.)

So, congratulations on a historic Internet first, NBC. But thanks for nothing.

More significantly, NBC’s policy meant that it lost an opportunity to build and make money from a new audience. Internet viewership is on the rise, and people are looking to share their thoughts about the Olympics online. Eighty-seven percent of fans planned on sharing news about the event via social media, and people aged 21-35 are the most likely to use social networks by far.

Give those people links to live content or clips, and they will share them. Over time, that audience will grow. And that audience is certainly monetizable.

NBC said yesterday that 219.4 million people watched the Olympics through the network, making it the most-watched event in U.S. television history, ahead of the Beijing Olympics in 2008 and the Atlanta Olympics in 1996. In addition, the network delivered 2 billion page views and 159 million video streams during the two-week event.

So despite the outlandish pricetag, NBC executives said they expected to break even on the event, thanks to the large viewership. It may even turn a bit of a profit in the end, when all the residuals and collateral benefits are toted up.

But let’s compare those figures to the social media impact. To take one small example, Netbase counted 93,000 #NBCFail posts on Twitter this month, generating nearly 148 million impressions. Sure, an impression on Twitter is worth a lot less than a few minutes spent watching YouTube or the TV. Still: 148 million negative impressions count for a lot against those 159 million video streams.

NBC’s short-sighted Internet strategy hurt the Olympic committee, too, by curtailing the audience of young, tech-savvy people who want to curate their own media, thank you very much. Many of these people would watch sports that escape the notice of the short-sighted NBC programmers, who seem to think the country is obsessed with watching hours of volleyball (and not the interesting kind of volleyball, either) and rhythmic gymnastics. Interesting and obscure sports like the omnium and the steeplechase might finally get their due, not to mention insanely popular but strangely neglected ones like soccer. (Yes, NBC, a lot of Americans like to watch soccer.) If you wanted to watch diving all day long, knock yourself out.

NBC also cut off a promising route around the time-zone problem that has plagued it for years. Instead of holding the news for the prime-time broadcast, it could simply broadcast everything on the Internet, like the BBC did. They could have reached a huge new audience, what viral marketing genius Jonah Peretti likes to call the “Bored at Work Network“: office workers who would be happy to spend a few hours at working slacking off by keeping a livestream open in a corner of their desktops.

I have a modest proposal for the next Olympics. It starts with the Olympic committee, which needs to sell Internet broadcasting rights separately from television rights. Cash-rich tech companies like Google or Facebook might see a lucrative opportunity in buying these rights, and they’d certainly do a better job than NBC did this year. Heck, even Yahoo could probably beat NBC’s Internet performance.

Maybe NBC will buy the Internet rights, too, and if so, fine. But at least it will realize that it’s paying for a valuable property and have some incentive not to squander it.