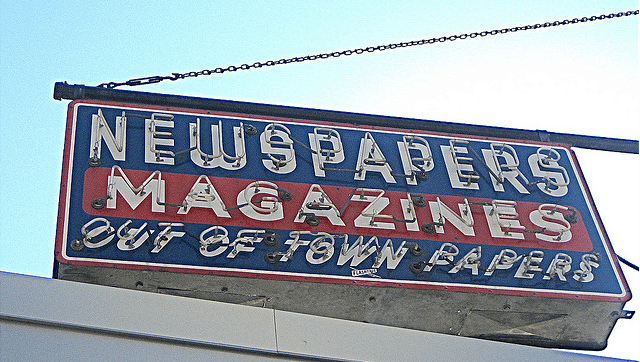 The secret, he is betting, is brand advertising displayed against high-quality, premium content.

That stands in stark contrast to the advertising model that’s worked best for the past decade online, in which increasingly specific text advertising is targeted at potential customers’ immediate desires, largely via search engines.

Glam Media aggregates content from a large network of vertical publishers. And Arora paints an alluring picture that might appeal to many print publishers, that are wondering where their profits have gone in the move to the web.

The problem with search-driven advertising, from the publishers’ point of view, is that it earns them a lot less money. Consider that a typical magazine or large-circulation newspaper page sells for tens of thousands of dollars, and that most magazines contain hundreds of pages of ads, and you can see how people like Si Newhouse and Rupert Murdoch got to be billionaires.

By contrast, it’s a rare web page that generates $10,000 in revenue for its publisher. Most probably don’t even hit $1,000. Even when they load their pages down with ads, web publishers are lucky to see $10 or $20 per 1,000 pageviews, which means only a smash hit blog post, one that’s seen by a million people, generates magazine-like money.

Web publishers respond by publishing more pages and delivering more ads, but that just increases the supply of pageviews, putting downward pressure on the price. Pretty soon you’re looking at an industry that is generating a tenth as much revenue as it used to in print, and publications are laying off staff and folding left and right. In other words, today’s media landscape.

How do you respond to that model? One of two ways (assuming you don’t just give up and write off the publishing industry altogether). Either embrace the search-driven, low-margin model and flood the Internet with as many pages of content as you can, or try to find a new market for high-margin, premium content supported by expensive ads.

The former approach works only if you have a cheap source of content, like Demand Media‘s army of low-paid freelancers.

The latter, high-margin approach is what Arora is trying to do. I spoke with him at a recent conference, where he was touting the recent successes of Glam Media.

Unlike search-driven advertisers, brand advertisers aren’t looking for immediate results: They’re looking to drive their brands deep into our brains, and to do that they need constant repetition of powerful images and words. They care a lot about the context that their ads appear in, so they’re drawn to quality content.

That kind of advertiser is conservative. Arora said that in an economic downturn, 85 percent of ad spending goes to the top 10 media companies. So Arora must be pleased that Glam Media recently came in at No. 9 on Comscore’s list of top U.S. media properties.

Such advertisers are also looking for volume, which Glam now delivers. The company says it has 88 million unique visitors every month in the U.S., and 210 million globally. Its network of content producers now includes 2,500 publishers and 4,000 individual bloggers. Thanks to its recent acquisition of Ning, Glam is also now the second-largest social network, after Facebook.

Does Glam’s approach work? Arora would say yes, pointing to a recent meeting he had with fashion bloggers during New York’s Fashion Week. Both were generating $1 million annually in revenues from Glam. One, however, was the head of a blog with 100 contributors — and the other was a lone blogger.

There is a notable exception, however: Glam’s approach doesn’t seem to work for news. He told me that the company looks for content that has lasting value, that isn’t easily replicated, and which he can use to target and sell high-value brand advertising. That doesn’t mesh well with daily news, which often has a short shelf-life (who wants to read yesterday’s news?) and includes content that is sometimes not friendly to advertisers.

In case you have any doubt, VentureBeat has a horse in this race. We are going for the high end, with quality journalism and reporting that, frankly, is harder to scale than building networks of free or cheap bloggers.

Maybe I’m just trying to convince myself — but I don’t think so. I think readers are tired of the same old crap that appears on dozens of blogs with only minor changes.

If readers and advertisers both want decent content, there might be a future for this journalism business after all.