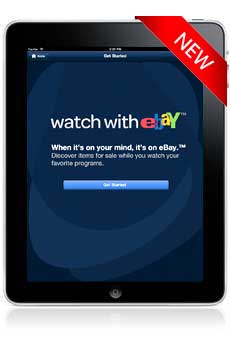 Online auction site eBay is launching a new feature for its mobile applications today to help boost purchases from customers while they’re on the couch watching TV.

The move is part of eBay’s new “Couch Commerce” strategy. Users that open up the company’s iPad app will see a new “watch with eBay” tab that lets them type in their zip code, cable provider and current channel. Based on your viewing experience, the app will then begin suggesting items from the 200 million listings available on its site.

For instance, if you see one of the characters on Supernatural referencing a monster database on his Samsung Galaxy tablet, eBay will pull up listings for all Samsung tablets as well as competitors.

For people who only casually watch television during the day, this could be a great way to do holiday shopping without having to fight the crowds at major retail chains. As for eBay, this new feature has plenty of potential to boost sales.

The company said it has plans to partner with networks, cable providers and others to help identify those product placement spots that usually go unnoticed within movies and TV shows (that is, unless you watch the CW).

While plenty of people are on a mobile device while watching television (86 percent, according to the company’s research), many of them aren’t always in the shopping mood. It’ll be interesting to see if this type of strategy working in the long-run when the “watch with eBay” feature gets added to the company’s other mobile applications.