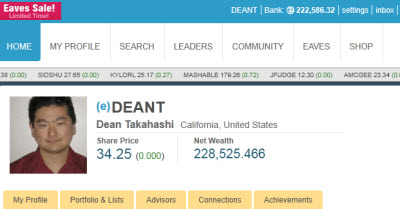 Empire Avenue has established itself as a stock market that measures the social influence of its members. The company’s social standing in the world moved up a notch today when it raised $1 million.

The Edmonton, Canada-based company has created a fantasy stock market that measures the rise or fall of your social influence. The more active and influential you are, the higher your stock price goes. It’s a good proxy for figuring out who the movers and shakers are in various industries.

I joined Empire Avenue early on and made a few “investments” in my colleagues from the media. I made some good bets and have seen my portfolio’s value grow from $289.217 virtual dollars in July, 2010, to more than $228,525.466 now. One good thing is I didn’t have to log in every day to get that wealth. I also have 73 shareholders who each own a piece of me. You earn more virtual currency through your own activity online, such as your Twitter posts. You can also buy virtual currency to invest in others.

The site determines your value based on your social currency, which tracks metrics for your social standing on sites like Facebook, Twitter, YouTube, LinkedIn and Flickr. Empire Avenue is also adding scores today for activity on Foursquare and Instagram. Empire Avenue says it now has users in 190 countries. The company will use the money to grow its team and expand its platform. The company says it is generating “strong revenue” through the sale of virtual goods, currency and partnerships for branded virtual items and achievements.

Duleepa Wijayawardhana, the chief executive of Empire Avenue, founded the company in 2009 as a way to help people benefit from the work they put into their online presence. The idea is to enable people to embrace their own personal brands and make new connections online. Empire Avenue has five employees and it previously raised $250,000. Indirect rivals include Klout and Peer Index.