That’s all it takes for children and people without IDs to buy illegal weapons on Facebook pages dedicated to the sale and celebration of guns.

A VentureBeat investigation has uncovered dozens of pages on Facebook where guns are for sale, including semi-automatic weapons, handguns, and silencers. While the transactions don’t actually happen on Facebook, the social network is a remarkably easy way to find shady people willing to sell you a weapon — no questions asked. The illegal transactions then take place in diners, dark parking lots, and isolated country roads — away from the prying eyes of the feds and local police.

In Kentucky, Greenup County Sheriff Keith Cooper remembers when a call came into dispatch last October saying a 15-year-old student had been arrested on the Greenup County High School campus for carrying an unlicensed and loaded 9mm handgun to school. The boy was arrested and brought to Cooper’s office for an interview.

When Cooper, a former Kentucky State Trooper with a heavy Southern drawl, asked the kid where he got the gun, his reply was shocking: Facebook.

As it turns out, the 15 year old’s purchase wasn’t an anomaly. Facebook pages have been a thriving market for facilitating gun purchases.

Even in their names, the Facebook fan pages make no attempt to hide what their real purposes are: Firearms Only Alamogordo, Guns for Sale, I Love Guns, and even Guns, Ammo & Blades.

The pages have hundreds of thousands of “likes” and members. While many of the sales are no doubt legitimate — federal law governing gun transactions between individuals are fairly lax — hooking up with illicit buyers and sellers via these pages is easy. For instance, you can buy automatic weapons without a permit, guns with their serial numbers filed off, and weapons that may be prohibited by your state’s laws. If you’re under 18, you can buy a handgun, which federal law prohibits.

On Tuesday, a VentureBeat reporter and his colleague spent less than 15 minutes arranging to buy a semiautomatic 7mm rifle and 90 rounds of ammunition from a guy named “Dave,” a member of Facebook “Firearms Only Alamogordo” fan page (left).

VentureBeat made contact through the fan page, and in the ensuing SMS chat, Dave expressed an eagerness to do the deal. The gun was in good condition, he explained.

When a VentureBeat reporter asked Dave if they needed to bring identification to complete the sale, his response was an immediate “no.”

Numerous interviews with federal law enforcement authorities, city police agencies, and anti-gun advocacy groups show how they view Facebook, Instagram, and other social media platforms with growing alarm as highly effective and unregulated online arms bazaars where people who shouldn’t be owning — or selling — guns can find a seemingly endless pool of eager customers with no questions asked.

“We look at Facebook and others as emerging threats for unlawful gun transactions in the United States,” a federal law enforcement officer told VentureBeat.

And as the VentureBeat investigation revealed, some of these guns being purchased through Facebook fan pages are ending up on the playgrounds of American schools.

Special Agent Helen Dunkel, with the Bureau of Alcohol, Tobacco, Firearms and Explosives, called the illegal purchases a fact. Dunkel said, “We are certainly aware social media is being used to sell firearms, and in instances we receive information, whether through confidential informants or other means, we definitely take that seriously and investigate.”

Dunkel said the ATF, which investigates the unlawful use and possession of guns and explosives in the U.S., has multiple ongoing investigations into illegal gun transactions on social media platforms. Citing the ongoing nature of the cases, she declined to specify them. The investigations are being coordinated through the ATF’s office of strategic intelligence in Washington D.C.

“We definitely see it occurring, and when we do, we open investigations. [Social media] is a new avenue we’re looking into. We’re definitely taking it seriously.”

A spokesman at FBI headquarters in Washington, D.C., declined to comment for this story, referring all questions to the ATF.

For its part, Facebook prohibits the sale or trade of guns, weapons, and explosives through the site and company spokespeople routinely remind reporters that they work with law enforcement on a case by case basis. A spokesperson said that any time user policy violations occur, they are dealt with. Facebook also likes to remind people that it’s not an e-commerce platform.

Nor is Facebook alone in being used for illegal activity. Sites like Craigslist have also been used in the past to sell weapons, drugs, and sex-for-hire schemes. (Craigslist has responded by banning such content, and by actively enforcing those bans.)

“You can’t buy things on Instagram and Facebook, nor can you promote the sale or use of weapons in advertising,” a Facebook spokesperson told us. “We encourage people who come across any illegal activity to report it to us.”

Oddly, buying and selling firearms on Facebook’s platform has been going on right under Facebook’s nose for far too long to go unnoticed.

In the October 2013 Kentucky case, the boy met the gun seller through a Facebook fan page called Portsmouth Pickers, a page where locals share information on the best fishing holes on the nearby Ohio River, recipes and even trading guns.

Cooper then arrested the seller, a man who drove across the river to sell the gun to the young teen. Because the seller drove across state lines, sold the weapon to a minor and violated federal gun laws,  the case was eventually turned over to the feds who indicted him.

As the case unfolded, investigators subpoenaed the kid’s and seller’s IP logs. They were able to clearly read the Facebook chat logs which led to the illegal sale. During the investigation, Cooper learned something else: The seller had been moving illegal handguns through Facebook channels before.

“Our investigation showed more than just the one 9mm,” the friendly Cooper said during a series of phone interviews.

“In fact, the suspect admitted to me that he was using Facebook to sell weapons. He met this kid, who we determined didn’t bring the gun to school to hurt anybody, through Facebook, and they made the arrangements through the site.”

The sheriff said buying unlicensed guns on Facebook is a good way to do it: no paper trail, no registration. Nothing more than cash and a handshake.

“That’s how I would do it,” the sheriff said of the illegal Facebook gun buy. “If this thing were to show up at a murder scene, it would be near impossible to trace.”

Quite a few offers

The Facebook page “Firearms Only Alamogordo” is a happening place. Members continually post videos of combat shotguns of the kinds Marines used to clear trench lines in World War I, Chinese-made semiautomatic AK-47 assault rifles with 30 round banana clips, and Ruger 9mms. The page is moderated by someone who identifies himself an active member of the U.S. Air Force.

The page has a prominent policy prohibiting the sale of guns to minors. 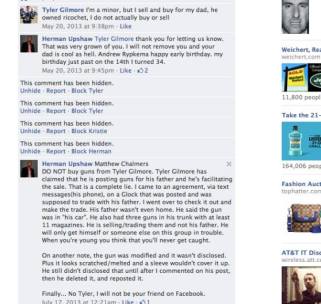 On a recent thread (right), a flame war erupted between a man who met up with someone he thought was an adult, for the purchase of a rifle. When he showed up, he was met by a minor who opened the door to the trunk of his car to reveal a small arsenal of weapons. When the prospective buyer asked the seller where his father was, the kid said he was sick.

Another recent thread, started by a junior high school student, asked members there if anybody would trade him a gun for his 30 gallon freshwater fish tank.

There were quite a few offers.

A petition on Change.org to prohibit gun sales on Facebook and Instagram has over 75,000 signatures, and was recommended by Sarah Silverman earlier today.

Earlier this week, Bloomberg’s group, with 1,100 U.S. mayors aboard and over a million supporters, threw down the gauntlet.

“Anybody can go to Facebook and Instagram and buy a gun online. We’re asking them to review their policies. They facilitate the sale of guns in the U.S., said Erika Soto Lamb, a spokeswoman for Mayors Against Illegal Guns. They also launched a petition to get Facebook to the negotiating table.

The petition, in part, reads:

Facebook and Instagram are currently being used to facilitate sales and trades of firearms between private sellers. Most of these sales and trades can take place without background checks, meaning that there’s no way to stop a Facebook or Instagram user from potentially selling a gun to a felon, a domestic abuser or another dangerous person who would otherwise be prohibited from obtaining a gun. I think of Facebook and Instagram as places to share photos of my kids & family — not as an online market for guns.

It seems to have worked. Facebook and the advocacy groups are currently in discussions about what they can do to curb illegal gun sales through the Facebook platform.

We’ve not yet heard whether the social network is changing its fundamental policies or how they’re enforced.

But if it does, and it succeeds in shutting down social media gun sales, it will make a lot of people in law enforcement very relieved.

Updated Feb. 27 at 12:20pm Pacific: We removed the word “felons” from the introduction to this story, since we report no evidence of felons purchasing guns via Facebook.