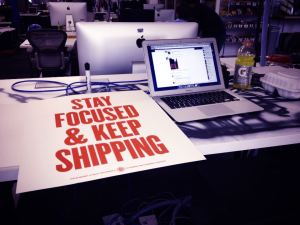 In its IPO filing Wednesday, Facebook identified mobile’s limited revenue potential, competition from other social networks, and the potential loss of advertisers as factors that could seriously harm its business. But was the social networking company, which relied on advertising for 85 percent of its revenue in 2011, forthcoming enough about the real risks associated with its primary money-maker?

“The issue of click-through rate was not mentioned as a risk in the S-1,” said Peter Adriaens, a professor of entrepreneurship at the University of Michigan’s Zell Lurie Institute for Entrepreneurial Studies. That omission stood out for the Internet IPO expert because research suggests that the percentage of Facebook users who actually click on ads is quite low, and that means advertising dollars could eventually drop.

Facebook does not publish its average click-through rate (CTR), but independent analysis from Webtrends on more than 11,000 Facebook campaigns showed that the average CTR for Facebook ads in 2010 was 0.051 percent, which is about half the industry standard CTR of 0.1 percent. The rate, according to the Webtrends report, dropped from 0.063 percent in 2009, which points to a downward trend.

“Even though [Facebook] talked about … the fact that it has about 40 percent of all the online banner ads, that the cost per advertising paid to the company has gone up by 18 percent,” said Adriaens, “it didn’t take it all the way through to the next step and that is the click-through rate.”

Facebook, for its part, partially alluded to this potential risk in the S-1, but didn’t do so in a way that provided full transparency to would-be investors, Adriaens argued.

Advertisers may view some of our products, such as sponsored stories and ads with social context, as experimental and unproven. Advertisers will not continue to do business with us, or they will reduce the prices they are willing to pay to advertise with us, if we do not deliver ads and other commercial content in an effective manner, or if they do not believe that their investment in advertising with us will generate a competitive return relative to other alternatives.

In Adriaens’ opinion, Facebook is leaving key pieces of information about the future health of its advertising business off the table by not mentioning CTR and its change over time.

Because of Facebook’s rich targeting options, and an advertiser’s ability to know that a campaign was seen by the exact audience intended, Kaykas-Wolff said that his company is willing to spend more on Facebook ads than it would elsewhere, sometimes bidding as much as $1 for CPC (cost per click) campaigns. “Facebook is one of the cornerstones of our media mix for the remainder of the year,” he added.

The CTR is immaterial to Wolff’s primary objective, which is to place ads in front of specific audiences and get validation that people saw the ads. For now, Mindjet is happy with “likes” and shares on the sponsored ads it runs. “We’re not trying to drive click-throughs, we’re trying to drive activity,” he said.

Having previously worked at Involver with brands on the platform side of Facebook’s business, Kaykas-Wolff strongly believes that he’s not alone in his bullish stance on the appeal of Facebook ads. More mid-market companies will test the waters and increase their Facebook ad spend in the years ahead, he predicted. Plus, he has full confidence that the social network has plenty left up its sleeve and will release even better targeting options and more types of ad units in the months and years ahead.

Of course, that logic presumes that Facebook will be able to continue to collect a slew of data on its members for targeting purposes, which is no longer a given in countries in the European Union.

“[Facebook] talked about the risk of privacy laws … but what was not mentioned is that the European Union issued a list of 35 requirements related to privacy that Facebook is going to have to adhere to,” Adriaens pointed out. “[Facebook] can’t automatically collect the data that it might be collecting in North America … so what I see going forward is this challenge … of having to deal with very fragmented privacy laws. Those privacy laws are directly going to affect the value of Facebook’s data to its advertisers.”