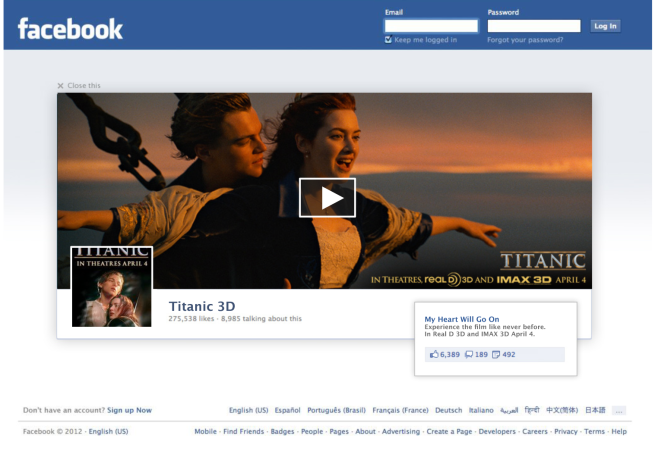 Facebook’s log-out page will soon be transformed into premium digital billboard space ripe for messages from advertisers. The ads, should history repeat itself, will flop with Facebook members, but buyers will snatch them up anyway.

“This is a fairly traditional play in the ad world,” Mindjet head of marketing Jascha Kaykas-Wolff told VentureBeat. “It’s a natural progression for them … it’s clearly a huge amount of inventory, and I don’t think people are going to turn [the ads] down, but it’s not a silver bullet by any stretch of the imagination.”

Facebook announced log-out page ads Wednesday as part of its souped-up Premium ad offering. The units, arriving in April, are a brand new, optional fourth placement for buyers, and are designed to complement the other three placements: Page posts, right-hand side ads on the homepage, and ads in the News Feed.

With 37 million people logging out of Facebook each day, the company believes advertisers will want to reach this massive audience.

The log-out page ad is quite the opposite of novel. Yahoo, Microsoft, and others have more than toyed with such placements, offering their advertisers a way to present those exiting their sites with an enormous ad unit too big to ignore. But consumers do tend to ignore them.

Yahoo, which ran the ads for several years, initially positioned them as higher CPM units, but later deeply discounted them due to poor performance, Kaykas-Wolff told VentureBeat. The ads were eventually discontinued.

Kaykas-Wolff spent more than four years as a business development manager for Yahoo in the late 1990s and early 2000s, and he would often put together ad packages for prospective buyers. “They were, historically, capturing a lower CPM, because it’s not really an interaction point that’s meaningful,” he said.

Kaykas-Wolff likened the log-out ads to the targeted coupons consumers receive with their credit card statements. “They’re not really going to elicit you to go purchase more stuff … it’s not the right environment,” he said. “If I’m logging out of Facebook, leaving Facebook … I’m logging out. Could somebody capture my attention and bring me back in? Maybe, but it’s not going to be the first thing that’s on my mind.”

Facebook is likely aware that the log-out page ads won’t dramatically increase engagement for its advertisers or bring back droves of members ready to depart, so why bother?

So, the addition is all about appearances — and getting buyers to buy more, of course.

“This ad unit … is a lot more consistent with other networks that you have the ability to buy into,” he said. “This is another indication that Facebook is a larger network and that it does have different types of inventory that, as a buyer, you can think about in concert with buying on CBSi, Yahoo, or MSN.”

The ads, he said, are a wholly uninteresting addition to the experience. “They’re just another piece of inventory.”

But as uninteresting as these ads may be, and here’s the key, they will attract buyers — including MindJet. “Would I buy it as part of an overall program? I wouldn’t have an issue with that. It’s just another part of Facebook’s network,” Kaykas-Wolff said.