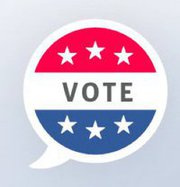 Chalk one small victory up to Silicon Valley’s influence on the mid-term election after the tech-savvy candidates fell to the wayside. 12 million Facebook users declared their vote on the site, up from 5.4 million in the 2008 election, according to Facebook.

Facebook users were able to declare that they voted on the social networking site with a badge on the news feed, encouraging a good number of users to talk about their voting experience and who they voted for on the site. They were encouraged to become fans of candidates they wanted to vote for, as well.

As a result, Facebook predicted the outcomes of 74 percent of the House races and 81 percent of the Senate races by judging which candidate had more Facebook fans. Though there were some upsets, like Tea Party candidate Christine O’Donnell, being able to predict three out of every four races isn’t all that bad.

CNN also used a number of social media analytics tools to gauge the conversation surrounding candidates on Twitter, which proved to be pretty successful. CNN’s algorithm for tracking Twitter conversations showed Harry Reid ahead of Sharron Angle in the Nevada senate race, 55 percent to 45 percent. Reid ended up defeating Angle with 50.2 percent of the vote. Most major polls showed Angle ahead of Reid, according to a report by FastCompany.