A little more than a year after announcing it was taking on Netflix, YouTube, et al. in the video-streaming sphere, Facebook has revealed that it’s expanding its Facebook Watch platform to publishers and viewers around the world.

Facebook first started broadcasting its slate of original programming last August, kicking off with a duo of shows called Ball in the Family and Virtually Dating. In the intervening months, the social networking giant has boosted the on-demand service with dozens of new programs spanning drama, comedy, reality TV, talk shows, sports, and more. A few months back, Facebook also committed to news shows produced exclusively for the social network. Curiously, Facebook Watch scored its first Daytime Emmy Nomination in February for Mind of a Chef, a reality-based cooking show that originally aired on PBS.

So far, Facebook Watch has only been available to those in the U.S., but starting this week it will be available in all markets around the world. 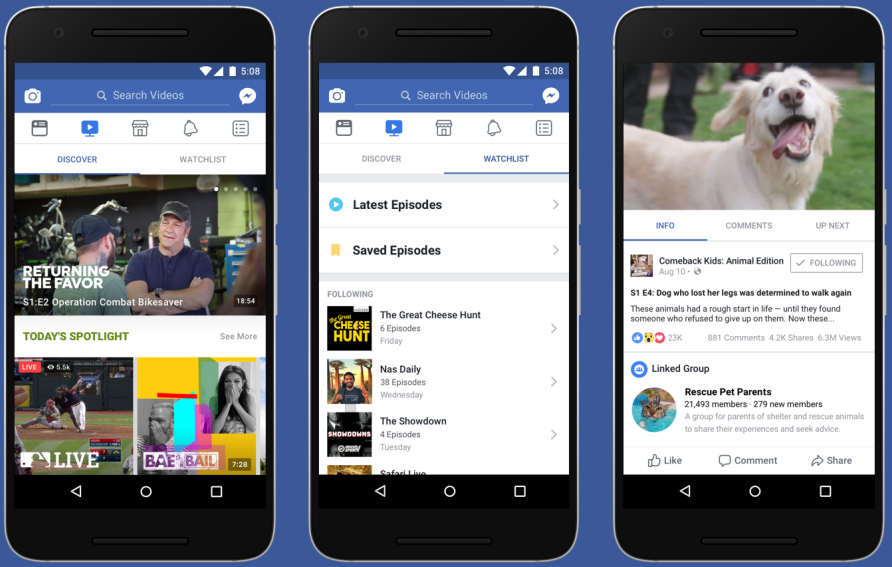 However, the ad break service — which allows publishers to insert advertisements into their videos — will only be made available in the U.K., Australia, New Zealand, and Ireland, according to Variety, as well as in the U.S., where it has been available to some publishers for the past year. Another 20-plus countries across Latin America, Europe, and Asia will be added to the mix over the next few weeks.

As before, publishers and content creators get to keep 55 percent of ad revenues, with Facebook scooping up the rest.

Facebook has embraced the video medium for some time already, and it previously launched a Facebook video app for smart TVs and set-top boxes that lets viewers watch any Facebook video on a big screen. A few months back, the company also launched Oculus TV to allow users to watch movies and TV shows in virtual reality through the Oculus Go VR headset.