While it has taken steps to clamp down on the spread of “fake news,” Facebook continues to resist attempts to portray the company as a media entity. But the reality is that many people use it as a news outlet and have come to think of it that way, according to a recent study.

A report released Thursday by the Pew Research Center examined how more than 2,000 U.S. adults find and consume news during an average week. It asked them twice a day for a week about where they got their news, and asked them to describe the experience.

About 10% of the users surveyed said the source of their news was Facebook, a figure that had the social network besting bonafide media entities that included the New York Times, Washington Post and CBS.

Described in different terms, the respondents who answered “Facebook,” couldn’t remember which specific news outlet produced the news that they saw, just that it came via the site’s news feed. In fact, almost 50% of those surveyed by the Pew Center researchers couldn’t remember the original source of the news they came across, even just a few hours after they had read it. For media companies relying on brand awareness, that’s a somewhat disturbing statistic. 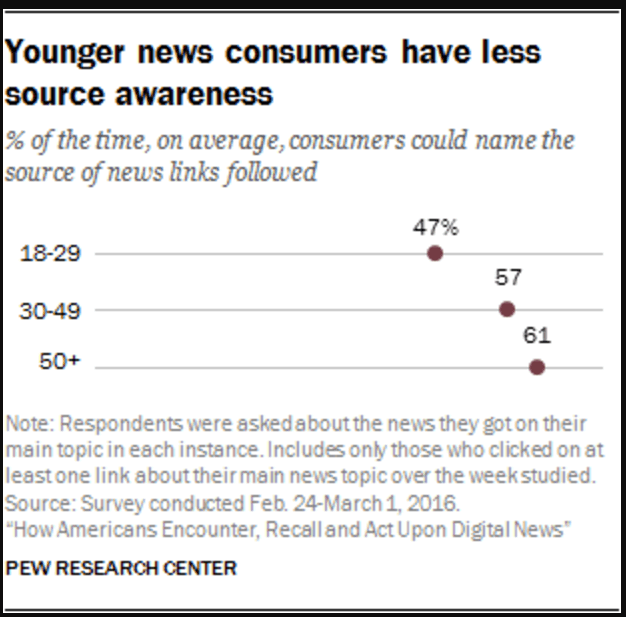 This “source blindness” appears to be even more common among younger users, the Pew Research Center found. Social media is by far the most popular way of finding news, and less than 50% of respondents in that age group could remember the original source of the news they saw.

What this suggests is that for younger users in particular, Facebook and other social services are becoming their news outlets of choice, and the actual media company producing the news is largely irrelevant—or at least not worth remembering.

For publishers who are handing over increasingly large amounts of their content to Facebook and other social platforms, this raises the risk that they will simply become nameless suppliers of commodity content, while Facebook becomes known as the source of news. Is the revenue that media companies get worth that exchange?

In keeping with their use of social media as the main pathway to news, younger users also tended to come across the news while they were doing something else, as opposed to specifically going out to search for news content. Older users were more likely to go looking for news and to visit media companies’ websites directly.