Would you interact with a digital ad featuring polls, games, augmented reality (AR), or some Frankensteinian combination of the three? Facebook seems to think so. The social network this morning announced it will broadly launch three new ad units on its platform, starting with polls and playable ads in the mobile News Feed and followed by AR ads in beta globally this fall.

The trio of new formats come months after Facebook launched a poll sticker for Instagram Stories ads. Playable ads, an interactive video product that lets users install and try apps before buying them, made its debut at the ChinaJoy gaming conference in August 2018. As for AR ads, a select group of advertisers has been testing them since their 2018 reveal at Facebook’s F8 developer conference.

“People want to be included in your next big idea and are using new innovative ways to do it,” wrote Facebook in a blog post. “In turn, brands and people are becoming more intertwined, and it’s changing digital advertising from a one-way push communication to an ongoing dialogue powered by creativity. To help brands further embrace this trend, today we are announcing new ad solutions that encourage a playful experience between people and businesses and deliver results.” 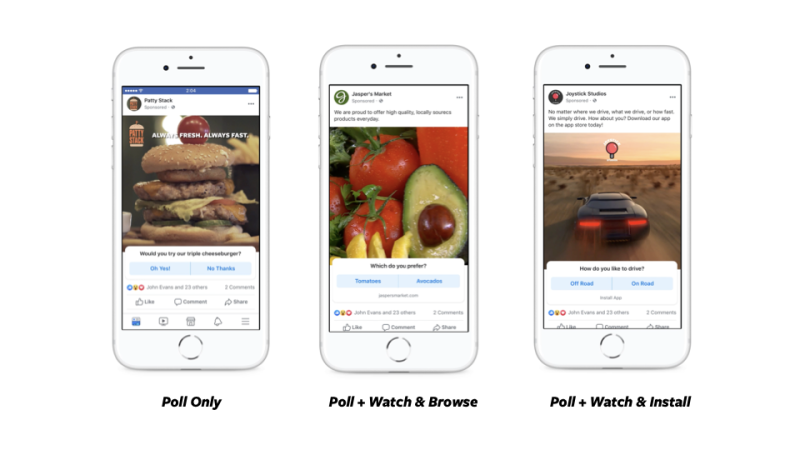 Polls are hot stuff, according to Facebook, which claims that poll ads increased brand awareness compared with video ads in 5 out of 9 brand lift studies. As for AR, the Menlo Park company points out that 63% of internet users surveyed say they’ve tried an AR experience created by a brand and that makeup brand WeMakeUp saw a 27.6 point uplift in purchases coinciding with the rollout of its lipstick try-on AR ad.

Demos unsurprisingly boost engagement, too. Facebook says a Vans playable ad created in collaboration with Facebook’s Creative Shop drove a 4.4 point lift in ad recall, as well as a 2.4 point lift in favorability.

“E! continually seeks deeper ways to connect with viewers,” said E! Entertainment digital marketing senior director Eric Eckstein, a poll ads purchaser. “The launch of Facebook poll ads was an exciting opportunity for us to use media in a fun and interactive way ahead of the season 4 premiere of Total Bellas. Giving fans an opportunity to engage with the show helped us create meaningful interactions that drove success throughout the season.”

Facebook earned $16.6 billion in ad revenue for Q2 2019, a 28% year-over-year increase. The average price per ad across services dipped 4% during the quarter, while ad impressions served rose 33%, and 94% ($15.6 billion) of Facebook’s ad revenue came from mobile ads.