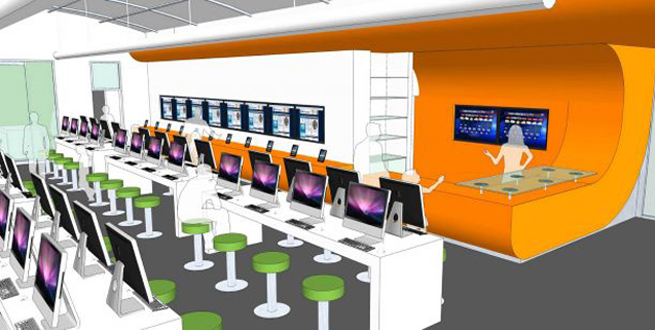 It’s hard to image the public library without any books at all, but if San Antonio’s Bexar County has its way, the first completely bookless library in the U.S. will open in fall 2013.

We’ve seen the writing on the wall for quite some time. The popularity of digital books and content continues to rise, while printed materials see less interest. But no American public library has seriously opted to become 100 percent digital until now. Back in 2011, Newport Beach, Calif. wanted to make its original library bookless, but the public revolted, so it stopped those plans.

The Bexar county project will be called “BiblioTech” and aims to supplement public libraries with books in the county. The project is being led by Bexar county judge Nelson Wolff, who claimed to be inspired by reading Steve Jobs’ biography by Walter Isaacson.

“If you want to get an idea what it looks like, go into an Apple store,” Wolff told the San Antonio Express News. “It’s not a replacement for the (city) library system, it’s an enhancement. … People are always going to want books, but we won’t be doing that in ours.”

While there won’t be books, BiblioTech will still include some services we’ve come to expect from libraries. For example, it will lend out e-readers for two week periods.

Wolff will ask the Bexar County Commissioners Court on Tuesday to approve several measures to get BiblioTech off the ground.

“We wanted to find a low-cost, effective way to bring reading and learning to the county and also focus on the change in the world of technology,” Wolff told the Express News. “It will help people learn.”