One might argue that Facebook behaved with imperious disdain, or callous indifference at best, in its treatment of publishers in the final month of 2016. The social media giant admitted misreporting publishers’ Instant Articles, as well as multiple errors regarding the estimated reach of posts, measurement of reactions to streamed videos, its Graph API, and more. This series of revelations came just weeks after the company had made similar disclosures about problems with other video and ad measurement metrics, which had affected both publishers and advertisers.

Facebook’s troubling announcements also came on the heels of its fake news fiasco, which erupted after the U.S. presidential election. CEO Mark Zuckerberg initially downplayed his company’s role in the election results, saying, “Personally, I think the idea that fake news on Facebook — of which it’s a small amount of content — influenced the election in any way is a pretty crazy idea.” However, the absurdity of his position was brought home by President Barack Obama’s pointed rejoinder. “If we are not serious about facts and what’s true and what’s not, if we can’t discriminate between serious arguments and propaganda, then we have problems,” Obama said in a news conference in Germany in November.

Following the U.S presidential election, Facebook says it is undertaking measures to root out fake news and de-prioritize such posts in users’ newsfeeds. However, for publishers who watched fake news overtake their carefully reported news stories, these steps may feel like too little too late. And the measures may prove too blunt an instrument, as this tweet from Rebecca Schoenkopf of Wonkette suggests:

I scrolled down 50 posts in FB today before I saw a single news story. FB is throttling ALL news, hard. Wonkette's FB traffic down 75%. https://t.co/Q14gDNLPoc

Meanwhile — before Facebook’s December problems were revealed — I had the honor of debating Mashable chief content officer Gregory Gittrich at Web Summit 2016. The motion was Social media dilutes your brand — Publishing direct content on social media, over time, negatively impacts your brand integrity. Our moderator was Tom Dotan, a reporter at The Information. Gittrich’s smart argument about embracing social media carried the day. After the debate, the audience voted against the motion by a show of hands.

Below is a transcript of my argument delivered on November 10, 2016, edited slightly for clarity and brevity. Caveat: Given the forum, some of my remarks were intentionally hyperbolic in order to make a point.

TODAY, if you’re a publisher, Facebook is the devil. And the devil is offering you a deal:

Take your core product, your journalism, and give it to us. The snake beckons…I’ve got this wonderful temptation, only it’s not an apple, it’s Instant Articles. If you give us all your content, you’ll need fewer engineers — we’ve got a WordPress plugin. And you’ll need fewer salespeople, we’ve got ad sales covered for you. Just give us your content, and we’ll do the rest.

But instant articles are a deal with the devil. And you will get burned.

I will provide you with three reasons why publishing directly to social media will harm your brand over time. And by social media, I’m going to be talking about Facebook, although my argument applies to all platforms.

First, Mark Zuckerberg’s interests are Facebook’s interests, not yours. By publishing directly to Facebook, you will surrender your commercial and editorial destiny.

Second, Facebook is a social network, not a media platform. It can be useful for marketing, but it’s not suited for the direct publication, consumption, and distribution of your journalism.

Third, Facebook takes over and effectively rebrands your brand — your unique look, feel, and reader experience becomes common. You will surrender and abandon that which sets your brand apart, what makes it special.

All right, now let me offer some points to back up each of my reasons.

One: Facebook has time and again revealed itself be self-interested.

Consider the preferential treatment given videos directly uploaded to Facebook, as opposed to YouTube videos being shared. All of sudden, Facebook has amassed a library of videos and detailed information about people’s viewing habits, all of which is used — not to show me the video I want, but one that best serves Facebook’s business interests and drives ad revenue.

The same is happening with Instant Articles. Publishers are giving ­Facebook a trove of content, a very valuable asset that is often produced at great cost. Yet Facebook can choose to display it — or not.

Which, of course, brings me to the notorious Facebook algorithm, which, as we all know, has time and again de-prioritized journalism in favor of pictures of your cousin, recipes from my Aunt, and so on.

In 2015, after some initial changes to the algorithm, sites like Huffington Post reported a traffic drop of 60 percent over a 10-month period; BuzzFeed witnessed a 40 percent reduction in referrals.

And earlier this year, according to a report in Digiday, traffic for publishers declined about 20 percent from January to March: “The data showed the biggest drops came from publishers that have been heavily invested in Instant Articles.”

More recently, the number of people seeing the average post published on a publisher’s Facebook Page has been cut in half. From January 2016 through mid-July 2016, publishers’ Facebook Pages have experienced a 52 percent decline in organic reach, according to social publishing tool SocialFlow. That statistic is based on the company’s analysis of roughly 300 media companies that use its tool to manage their Facebook Pages, which include the New York Times, Wall Street Journal, Condé Nast, and Time Inc.

And if this doesn’t convince you of Facebook’s self-interest, let me mention the massive over-reporting of video views — by 60 to 80 percent — that Facebook admitted to this September.

Instant articles are designed for a news feed, accessed via a mobile device. They offer none of the richness of information, like a searchable archive of a website or app.

Further, while obvious, the fact that Facebook controls all the data concerning your readers will hamper your ability to serve them and make money.

Facebook’s goal is to keep its users — they’re called users, not readers — on its platform, and not to drive them to your site, where you can better monetize them. In this way, Instant Articles are the trap keeping people inside the walled garden.

Even as Facebook seems to offer publishers more ways to make a little bit of money, very few publishers will get good deals and make any meaningful revenue, as Bloomberg CEO Justin Smith said yesterday.

In fact, at VentureBeat we often see — and anecdotally, it seems to be increasing — stories blow up on Facebook in terms of interaction, reach, and so on, but result in scant traffic back to our site.

Three: Facebook sets the rules for your brand’s look, feel, and reader experience. You will surrender and abandon that which sets your brand apart, what makes it special.

Publishers live in a multi-platform world and understand the need to tailor content to specific devices and platforms, and it’s here that Instant Articles really hurts your brand.

Consider what would happen to your experience of The National Geographic — a magazine famous for its glorious photography, like the young Afghan girl with piercing green eyes or a majestic lion roaming a South African nature preserve.

As an instant article, a Nat Geo story gets reduced to the lowest common denominator, in terms of format. There’s no longer anything special. A couple of images and some words — no different than, dare I say, a Mashable or VentureBeat story.

And why should this surprise anyone? Facebook was built for social sharing, not for media publishing.

One: Facebook’s interests are not your interests. They are competing with you for ad dollars and readers.

Second: Facebook is a social network, not a media platform.

Third: Facebook’s Instant articles will reduce your brand to the lowest common denominator.

Finally: Don’t be tempted. Don’t do a deal with the devil. Don’t bite the apple.

After the debate ended, I received very positive feedback from several Web Summit attendees and was also taken to task by an audience member who misunderstood some of my purposefully exaggerated sentiment. There was so much more to talk about regarding Facebook’s relationship with publishers: censorship and the “Napalm Girl” photo, perceived bias of human editors, and many other relevant topics.

Greg Gittrich was an able foe, and it was fun debating him. Here is my favorite comment from a listener: 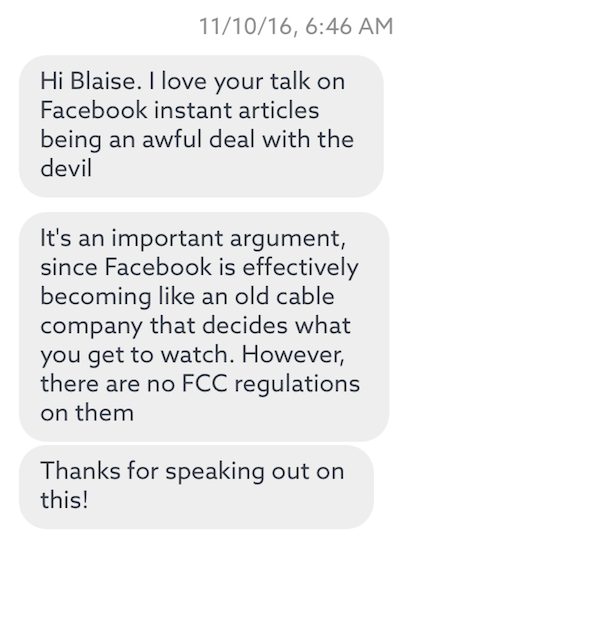