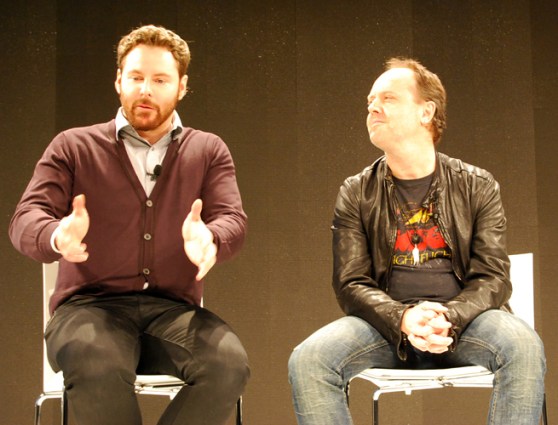 NEW YORK CITY — To celebrate Metallica’s music now being available on Spotify, two former rivals — Metallica drummer Lars Ulrich and Napster co-founder Sean Parker — took stage today at a Spotify event to talk about their crazy past and the future of the music industry.

A little background: Back in the late 1990s, Napster and Metallica had a loud and bitter fight against each other over Napster sharing music for free. Metallica was portrayed as greedy scumbags, and both Napster’s Parker and Shawn Fanning were viewed as either Internet folk heroes taking on the man or clueless, greedy punks, depending on who you ask.

“Back in 1999, we were depicted as these greedy pirates who supported the wholesale stealing of music,” Parker said. “We just wanted to make music more free — freedom, not free as in theft.”

Ulrich said the fight really hurt Metallica’s image with its fans, but it felt the need to fight because it wanted to control how its music was distributed. At the event, Ulrich said:

“It was never about money, it was about control. It was about being in your bubble and controlling the access. If Napster had approached us first and given us options, it might have been a little different. Instead, control was taken away from us. It turned into, ‘If you fuck with us, we’ll fuck with you.’ … Instead of Napster versus Metallica, it became Metallica versus its fans.”

Both Parker and Ulrich agreed that they did not come off well in the battle. But now, the two can sit on stage together acting chummy and making jokes, because Metallica has agreed to put its library of songs on the  streaming music service that Parker is an investor in.

Parker and Ulrich used the spotlight as an opportunity to give Spotify a lot of credit for bringing artists to the table and paying music royalties. (Spotify CEO Daniel Ek said today that Spotify has paid out more than “half a billion dollars” to artists and labels.) Ulrich praised Spotify for being easy to use and making it easier for fans to access music.

“When I was trying out Spotify for the first time, I was stunned at the ease of it,” Ulrich said. “This was so easy and set up for the fans.”

Adding Metallica to its song library is clearly a big win for Spotify, and Parker said it shows that Spotify was the right company for him to invest in. His belief back in the Napster days, he added, was to “make music social,” which Spotify has done by being aggressive.

“Once I became an investor, after Facebook, I started looking at every music service. None of them had the right model around music. Most of these companies were taking plain vanilla record deals from the industry. [Spotify was] very stubborn and made the right deals,” Parker said.

As for the future and bringing even more major bands to Spotify, Ulrich suggested it would take these acts to fully realize how the younger generation experiences and interacts with music now.

“The ones that are left out don’t have children,” Ulrich said. “I have kids and they interact with music so much differnetly than we did.”