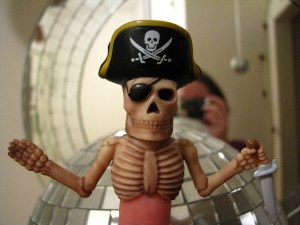 Influential New York investor Fred Wilson was one of the earliest and loudest opponents of the anti-piracy bill SOPA. He worried that it would threaten sites he considered legitimate, like Reddit, or Tumblr, which is backed by his firm Union Square Ventures. But as CNET’s Greg Sandoval reports, Wilson said yesterday that he supports the idea of an independent body which would create a blacklist for known pirate sites.

“If we created an independent body that essentially created a black and white list,” Wilson told a crowd of media executives at the Paley Center in New York. “The black list are those sites we all know are bad news. We all know who the good guys are who are truly licensed and are operating legitimately. And we know who the bad guys are.” CNET reports that Wilson named Hulu, Netflix, Rdio, Spotify and Rhapsody among the good guys.

The tech industry and the entertainment industry have very different ideas of what a pirate site looks like. If they both had equal representation on this independent body, perhaps they could agree on the most obvious villains. Wilson suggested services like MegaUpload, Pirate Bay and the various BitTorrent sites as the kind of sites that would be on the blacklist. “Using technology, we train our youth to know that they’re doing something bad and how they could do something that’s good.”

But piracy is never that black and white. Tumblr, which Union Square Ventures invested in, certainly doesn’t fall under the category of “good guys who are truly licensed. (emphasis mine)” Instead, it’s a free-wheeling community where users often post copyrighted music and images. While you can argue that it falls under the DMCA safe harbor passed by Congress, and isn’t a pirate site looking to profit by distributing tons of illegal content, it is a home to many blogs that distribute links to full downloads of new albums.

As Wilson said at the conference:

“We gotta fix the system so that the content is available legally on the internet in a way that it is available for people to consume it. As convenient as turning on your TV and watching HBO, that’s how convenient it has to be. The content industry has not made this content convenient to access on the internet and as a result everybody, and I mean everybody, is a pirate. Okay so in the world where everybody is breaking the law, you gotta look at the law. Is it the right law?”