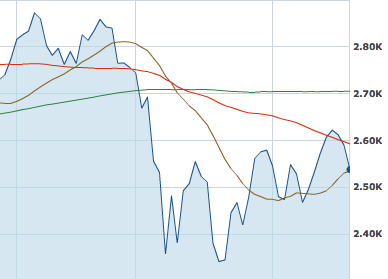 Continued uncertainty about financial stability in Europe and a government deadlock in the United States struck publicly-traded equities on Thursday, sending the tech-heavy NASDAQ index down 3.3 percent and below a technical level of support that might indicate future weakness.

The NASDAQ composite index (pictured above), which includes a number of the largest tech companies in the world, fell 3.3 percent while the Standard & Poor’s 500 index fell 3.2 percent. The NASDAQ composite index established a level of support at around 2,475 after a brief crash through that support level during August’s massive sell-off. The tech-heavy NASDAQ closed at 2,455 today — below its previous level of support.

That doesn’t bode well for fresh initial public offerings (IPO), which fell broadly during regular trading on Thursday. Only Zillow and Pandora, two web services that tackle real estate and music streaming respectively, notched gains amid the market’s sell-off. Spotify, a competing music streaming service to Pandora, announced today it would work with Facebook to simplify streaming music on the website.

Here are some of the market’s most recent initial public offerings, and how they performed as of the end of trading on Thursday:

Upcoming IPOs may encounter stronger headwinds given the market conditions. For example, in July Zynga filed to go public, hoping to raise up to $1 billion at an expected valuation between $10 billion and $20 billion. It made around $90 million in 2010 and $11.8 million in the first quarter this year. Despite that strong performance, investors may still prove skittish.

Groupon isn’t looking quite as rosy, with significant losses in its first operating year. A pair of $100 million IPSs in insurance software provider Guidewire and revenue performance management software provider Eloqua are in the pipeline. And Yelp chief executive Jeremy Stoppelman said his company is on track to file for an initial public offering later this year.

“My sense is that if you have a very compelling story, a robust business and there’s moats around it and it isn’t going away over night, the IPO window is still very much open,” Stoppelman told VentureBeat in an interview.

Consumer electronics super-giant Apple fell 2.5 percent while enterprise tech provider and computer manufacturer Dell was down 4.7 percent. Online retailer Amazon was down 3.7 percent while search giant Google was down more than 3.4 percent.