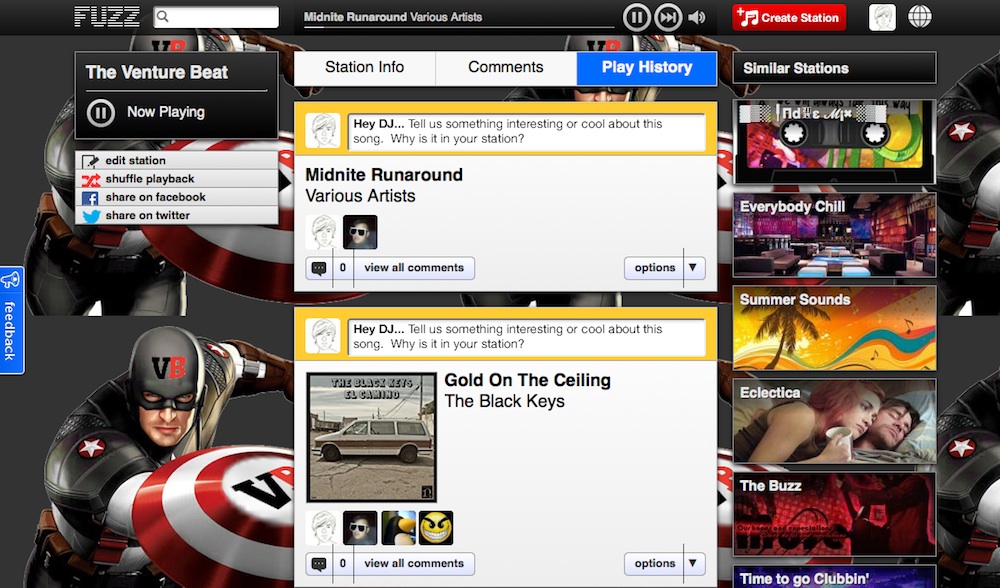 The founders of “Twitter for music” site Blip.fm this week launched the beta version of its brand new service Fuzz, a site that offers a new slant on interacting with songs you like and the people who share your tastes.

Unlike popular services Pandora and Slacker Radio, Fuzz dismisses the idea that algorithms are the best way to discover new and good music. Instead, the site focuses on creating a very social experience that relies on users building their own radio station(s) around a unique theme or custom genre using audio files from their own music collections. Each radio station gets its own page that features all the songs you’ve listened to thus far, with the most recent on top.

A list of recent listeners also appears within the station’s info, giving you perspective on who has a similar taste in music. That might prompt you to check out their self-created stations, facilitating your discovery of still more music. And to keep in touch with those you’ve added as a friend on the service, there’s a global activity feature located on the top control/tool bar.

“On Blip, and plenty of other socially curated media sites, we noticed that about 10 percent of people were power contributors and the other 90 percent were content to sit back and absorb (and interact) with what’s already submitted,” Fuzz co-creator Jeff Yasuda said in an interview with VentureBeat. “That’s what we’re expecting on Fuzz, and also where Fuzz will succeed (in a way that) Blip really couldn’t.”

Yasuda explained that Blip.fm tied a person’s musical preference directly to their profile page instead of custom radio stations. Following a user dictated your feed of music, and you had to visit a user’s page to gain their custom playlist of music. This presented a problem for long-term social interaction, and in turn, music discovery and curation, Yasuda told me. So for instance, if “mostly classic rock Tom” suddenly went through a four-hour period of playing bad ’80s pop songs by the likes of Cyndi Lauper, Foreigner, and Genesis, he could easily lose half his followers immediately. That means fewer social interactions, and less incentive to use the site over iTunes.

Fuzz fixes this by getting people to follow custom stations, where song choices can be a bit more predictable. Yet, the site still has most of Blip’s social features.

Friends from Facebook, Twitter, and other Fuzz users can listen to music on your custom radio station(s), regardless of whether they own the track or not, and provide feedback in the form of commenting on tracks, giving “props” (Fuzz’s version of the Facebook “Like” button), and hitting the replay (repost) button on songs they want to add to their own custom stations. And like a “Blip’d” message, you can see a list of everyone who commented, listened and re-posted the track.

That means fewer followers who don’t like the unpredictable variety of random song choices. For instance on Fuzz, I could create a mostly classic rock station composed of only music that played during episodes of CW television show Supernatural. That gives me enough leeway to occasionally throw in tracks like “Heat of the Moment” from Asia without completely alienating listeners who expect a certain genre. Or, I could just create a new ’80s bad music station called “Bravery if you admit to liking these songs.”

It’s worth noting that only songs you own will appear in your custom stations, even if you repost a song to it that you don’t own. If you buy the track, it should get added to the mix though. That doesn’t mean you can’t listen to music you don’t own that’s posted to other Fuzz users’ custom radio stations. This is entirely due to music licensing fees and making sure Fuzz isn’t drowning in owed royalties to music copyright owners. But Fuzz does pay some royalties via Sound Exchange, which amounts to far lower fees than those accumulated by streaming music service leaders Pandora and Spotify.

For this reason, Fuzz doesn’t allow users to embed digital media from third-party services such as SoundCloud or YouTube. This also removes any gray area associated with copyright infringement, which plagues a lot of music startups and prevents them from really taking off.

“The old adage of ‘infringe until you get big enough’ to fix a (music service’s) problems is dead in my opinion,” Yasuda said.

If you want the ability to play a song on demand, you need to own the track. Initially I viewed this as a downside, but having spent several hours listening to music on Fuzz, I can say that the overall experience wasn’t diminished. However, I was a bit annoyed that there wasn’t a list of tracks I’d reposted but couldn’t play, more-so for a few that I actually wanted to buy.

On the upside, Fuzz lets you skip or banish tracks you don’t like or want to avoid without any limitations. Pandora and Slacker limit the number of times you can do this, both to provide an incentive to sign up for their premium subscriptions and (I’m guessing) to preserve the algorithm that helps dictate the songs that play in your radio stations. With Fuzz, someone owns the tracks, and you can skip through it without consequence. 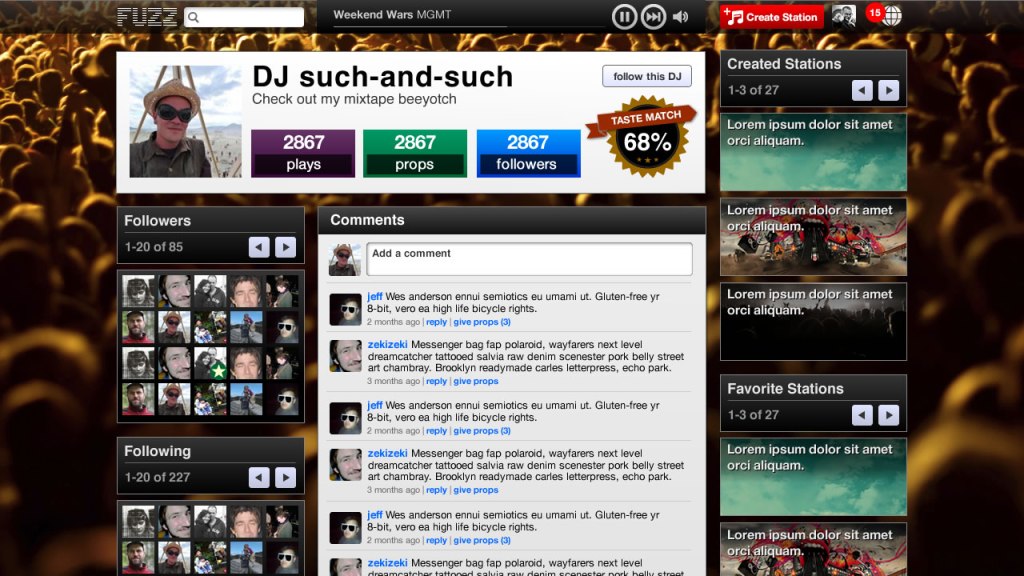 Obviously, Fuzz has plenty of competition, including sites like Pandora, Slacker Radio, Songza, and many, many more. Still, this is a unique way to play your own music, and a great attempt at integrating social features into the experience in a way that matters.

The startup has an interesting business model that includes advertising, a future premium subscription option, and other non-traditional promotion and marketing. Yasuda said Fuzz is working on mobile apps for iOS and Android as well as a slew of new features, like a personal taste-match percentage metric that mimics what OKcupid is currently using for dating. The Fuzz team is even borrowing a few more features from Blip.fm, like the following/follower count for user profiles, and may even add the ability to embed media within the comment stream of a user’s profile. (See screenshot above.)

Fuzz — whose founders include Yasuda, Brian Venneman, Eric Lambrecht, and Matt Weldon — currently has about $500,000 in seed funding from Core Ventures and a handful of notable digital music angel investors, including former president of MTV and Fuzz Executive Chairman Mika Salmi. The site’s advisers include former Billboard Magazine head of funding Lisa Howard, former head of Yahoo Music Michael Spiegelman, Ali Avdar of Imeem and Napster, and others. The startup has plans to raise an A round of funding in the future.