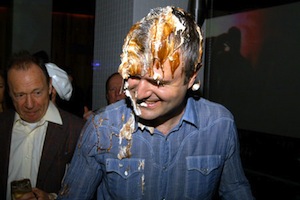 Gawker Media founder Nick Denton is probably the loudest advocate of ruthless, anything-for-pageviews blogging, but even he can be discouraged by always giving the masses what they want, according a just-published New Yorker profile.

Denton noted that many of his favorite stories, which usually focus on media gossip, don’t take off the way geekier, more gadget-focused posts do. Among Gawker’s blogs, the “geek sites” Gizmodo, Lifehacker, Kotaku, io9, and Jalopnik draw twice as much traffic altogether as the gossip sites, including Gawker itself.

“I’ve created this monster,” Denton told the New Yorker’s Ben McGrath. “Neither the stories that I like nor the writers that I like are rewarded.”

Keep in mind that one of the underlying themes of the piece, as with any Denton profile, is the way he cultivates a specific image of himself. (Yes, it’s kind of meta.) So there may be a deliberateness to the soundbite — it could be Denton’s way of saying, “Yes, even I must bend to the will of the readers. Those bastards.”

Even the geeky hits have a touch of Denton’s beloved gossip mongering. Gawker Media’s biggest story ever came when gadget blog Gizmodo purchased an iPhone 4 prototype from someone who found the device in a bar, a move that was controversial among traditional journalists. (For a month or so, anytime I talked to other tech writers, we’d ask each other whether we’d have paid for the phone, or if we found it unethical — I usually waffled.)

A good portion of the Denton profile is devoted to an overview of his biography, but it includes a few more details about Gawker’s revenue and future: