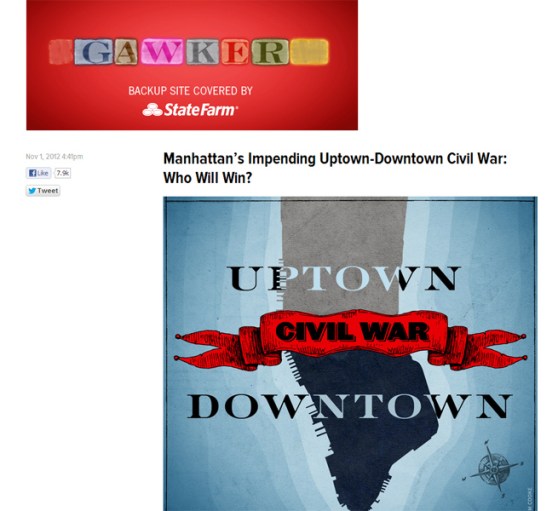 When Hurricane Sandy took out the data center that hosts Gawker, Buzzfeed, the Huffington Post, and many other sites, those sites went dark. But they weren’t offline for long: Buzzfeed and Gawker both turned to popular blogging service Tumblr (also based in New York) to continue bringing news of the storm and everything else to the public.

While Buzzfeed was able to get back up on its own servers in a few days, Gawker’s network of sites — including Gizmodo, Deadspin, io9, and Jezebel — is still living primarily on Tumblr. What you’ll find among these makeshift sites is the same content you’d normally find there, only with a more liberal approach to posting content.

Some stories don’t have headlines and others are “reblogs” from other Gawker Tumblr sites. The makeshift Tumblrs also feature a cleaner design that brings back memories of what Gawker used to look like before its 2011 redesign.

“All things considered, we’ve done a great job,” Gizmodo writer Leslie Horn told me from a temporary office. “It’s been stressful and disheartening, but I think there’s a silver lining in all of it. We proved to others that even a hurricane can’t stop Gawker.”

The company has done surprisingly well with Tumblr, taking advantage of the flexible platform and letting writers go wild. Some of my favorite posts this week include “Manhattan’s Impending Uptown-Downtown Civil War: Who Will Win?” and the “8 Tips For Tending to a Glamorous Drug Addict After Hurricane Sandy“. Gizmodo even continued to post full product reviews, and Horn set up a Tumblr called Gizmodo: The Movie.

“Tumblr is a largely amateur world,” Gizmodo Editor-in-Chief Joe Brown said. “These guys are professional bloggers. You give them these tools, they are going to blow the average out of the water.”

While the new design carries almost no ads, each site has a prominent State Farm sponsorship message at the top of the homepage, showing that the business side of Gawker is just as resilient as its technical and editorial components.

“Everyone has stepped up really well,” Brown said. “Within five minutes, it was apparent how we were going to handle it.”

Brown said Gawker’s network of sites should be back to normal on Monday, granted everything goes to plan. He noted that Gizmodo has no plans to continue using Tumblr, even for promotional use, as it does with Facebook and Twitter. However, he said it’s always an option.

“We reserve the right to influence and invade every dark corner of the Internet,” Brown said. “We have no plans to use Tumblr going forward, but we always could go that direction.”

While I’ll miss the fun, sometimes crazy content the Gawker team has put together using Tumblr, I can appreciate a company getting back to normal after a damaging and disastrous event.