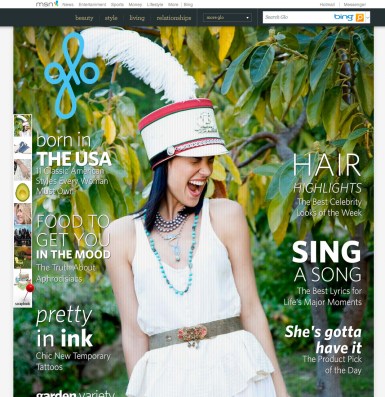 Conventional wisdom among media pundits is that glossy magazines are headed for history’s dustbin right behind newspapers. Still, the people who produce celebrity chatter and fashion photo shoots aren’t going to go out without a fight.

There’s no app for Glo yet. The site’s iffy behavior on my iPhone’s browser suggests an app might be a good idea.

Glo’s front-door layout looks like a magazine with a long scrollbar. Content-wise, the top stories are “11 Classic American Styles Every Woman Must Own,” “The Best Celebrity Looks of the Week,” and a poll that asks, “Which hair gadget would you save from a burning building — blow dryer or flat iron?”

Look, it’s easy to make fun of this stuff, but Glo is no dumber than the typical gadget blog.

The people behind Glo include former Yahoos Scott Moore and Lloyd Braun. Moore launched Yahoo’s Shine online magazine. Braun, according to Valleywag, “took much of the heat for Yahoo’s misconceived Hollywood adventure” before being ousted in 2006.

As a business, can Glo thrive in what’s said to be a slowly recovering market for the display ads shown on its pages? The only display ads I’ve spotted so far are from low-end clothing retailer JCPenney. I’ll feel a lot better about Glo’s prospects if they can land Louis Vuitton and Prada as sponsors.