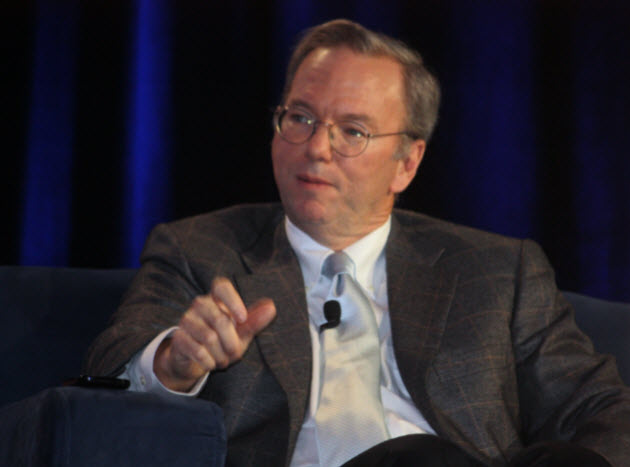 Google chief executive Eric Schmidt said today that his company’s Google TV initiative will bring the open web to TVs and result in much higher revenues for content owners, not less as some of the content owners fear.

Google has been locked in tough negotiations with a variety of cable and broadcast TV companies about getting the rights to show their TV shows and movies on Google TV devices, which are being made and sold by consumer electronics companies such as Sony and Logitech. TV content owners Hulu, Fox, CBS, ABC, and NBC have all blocked Google TV from accessing streaming video content. That’s frustrating for consumers who have dished out a lot of money since October for Google TV products.

Schmidt, speaking to Web 2.0 Summit hosts John Battelle and Tim O’Reilly in San Francisco on Monday, said that the issue revolves around piracy concerns. If Google TV allows unfettered access to the web, then users may be able to surf piracy sites and watch pay TV or movies for free.

With Google TV, TV manufacturers combine Google’s Chrome web browser, the Android operating system, and Linux in a set-top box or a web-connected TV. “You turn it on and, boom, you are in a full web browser,” Schmidt said. “You can go back and forth between web and broadcast content.”

Schmidt said that some of those who are negotiating with Google said, “Do you realize that you’re taking a dumb TV and making it smart? Yes. We are guilty of that. Their concern is this enormous revenue stream will be affective negatively by all this internet content. I disagree … Will people go to stolen content or consume more TV? We think it is the latter.”

Schmidt said that Google TV will liberate companies to create a whole new set of applications that will generate revenue. “You can have a tremendously powerful set of applications,” he said. “That is a big business. Think of new gaming platforms where you can immerse yourself in your TV.”

He added, “The way to get more revenue is to create more revenue sources, and you can do that with Google TV.”