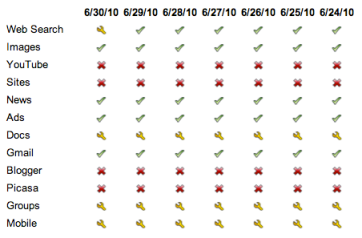 In what could be foreboding news for Google’s hopes to renew its license to operate in China today, the company’s Chinese Web search is now partially blocked.

While Google.cn had been accessible up until yesterday, the company reported that it was between 10 and 66 percent blocked on its dashboard this morning. (It had been blocked for just three other days this month on June, 17, 18, and 20, according to the Associated Press, so this could be a normal service limitation. Or it could be an genuine aberration in response to the company’s strategy shift earlier this week.)

To appease the Chinese government while sticking to its anti-censorship principles, Google changed its approach two days ago. Instead of redirecting Chinese users to the uncensored Hong Kong version of the search engine, it would create a landing page which linked to the other unfiltered site.

Google’s license to operate a commercial site in the country is up for renewal this week and the government indicated that its approach — in redirecting Chinese users to Hong Kong-based search was unacceptable, according to Google chief legal officer David Drummond.

“Without an ICP license, we can’t operate a commercial website like Google.cn—so Google would effectively go dark in China,” Drummond wrote. “That’s a prospect dreaded by many of our Chinese users, who have been vocal about their desire to keep Google.cn alive.”

Google has had a troubled relationship with the local government since earlier this year, when a hacking attempt prompted the company to revoke its longtime censorship of its China-based search engine.