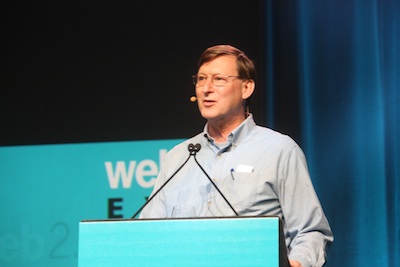 There’s no doubt that Google and Web search have had a huge impact on the economy, but how can you quantify that? Google’s chief economist Hal Varian took a stab at it on-stage today at the Web 2.0 Expo in San Francisco.

Of course, Varian is probably a little biased, since he gets a paycheck from Google, but he also had an academic career as an economist at UC Berkeley before going to work for the search giant, so he has some real credentials. And hey, his presentation had a lot of math in it, so it must be accurate … right?

There are three main pieces to Google’s economic impact, Varian said — and he seemed to define that impact beyond Google, so that it includes the Web search and online ad industries that Google has fueled. The first piece is the value of online advertising programs to advertisers and publishers, which is pretty straightforward from a financial standpoint, and which Varian calculated at about $54 billion per year.

Then there’s the value that Web search provides to users. This is harder to calculate, and Varian acknowledged, “I’m going to wave my hands a little bit here.” He pointed to a study where students were asked to find the answers to the same set of factual questions, and on-average the students using Web search found the answers 15 minutes faster than those using library books. The math gets a bit more complicated here, because many of the questions people ask on the Web just wouldn’t have been asked before, but using some other facts as well as something Varian called “the demand curve for questions,” he calculated that Web search saves people 3.75 minutes per day, which at an average wage of $22 per hour is worth $1.37. (Varian said you can also think of it this way: Would you pay about $1 a day to use Google? I would.) Multiplied across the US employed population of 130 million, that saved time is worth $65 billion per year.

For his final piece, which he didn’t bother to discuss, Varian said the value of ad-supported Web applications is $25 billion.

Add it up, and the total economic impact of search and advertising is more than $119 billion. (Varian said the third category overlaps with the first two, so you can’t add it to the total.) There are lots of other factors that Varian said he didn’t add, and the numbers are fuzzy, but even so, he said that when you look at “the value of search, the value of the Internet, of being able to get answers immediately, it’s a pretty big deal.”

Update: An earlier version of this post included a higher total, because I just added Varian’s three numbers together. But he warned TechCrunch’s Alexia Tsotsis against including the third number, since it overlaps with the first two.