Google has finally launched its long-rumored podcasting app as the company doubles down on its investments in the audio-focused format.

The news was seemingly released on Product Hunt prematurely by Google product manager Zack Reneau-Wedeen, but the app wasn’t available immediately. It is now available to download globally in 47 languages, on Android only.

The internet giant has been dabbling in the podcasting world for a number of years already, having launched its audio search engine app Google Listen back in 2009, before killing it off three years later. Google then added podcasts to its Google Play Music app in 2016. But podcasts have felt — and still feel — like second-class citizens in the Google Play Music app, and with podcasting growing as a medium, the company clearly feels the time is right to launch a standalone podcasting app.

The wheels for today’s launch were set in motion in April, when the company started to make podcasts available through the main Google Search app on Android, as well as through the Google Assistant. So if you typed one of your favorite podcasts into the search box, you could listen to it directly from within the search results. 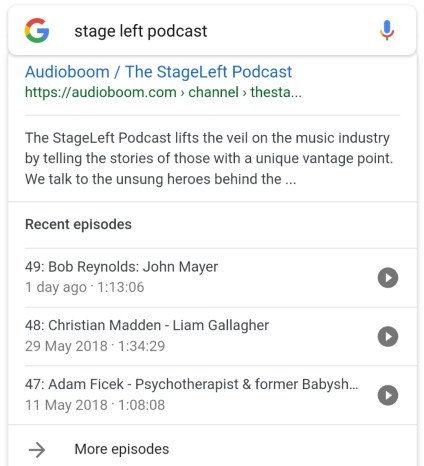 Google didn’t say at the time whether a standalone app was in the works, but it was fairly clear that such an app would be on the agenda — and a little bit of code leaked earlier this month more or less confirmed the pending launch.

Of course, there are already plenty of podcast apps on Google Play, but Google is Google, and it is promising a bunch of smarts to entice you. For example, the app will base its recommendations on users’ listening habits and subscriptions — discovery is very much the name of the game in today’s content-overloaded world. Google will also synchronize podcasts across platforms through Google Assistant, meaning you can listen on your phone on the way home from work and pick up where you left off on your Google Home smart speaker when you walk through your front door.

The app also includes all the usual features, such as downloads, subscriptions, and — interestingly — a donation button so you can buy your favorite creators a beer. 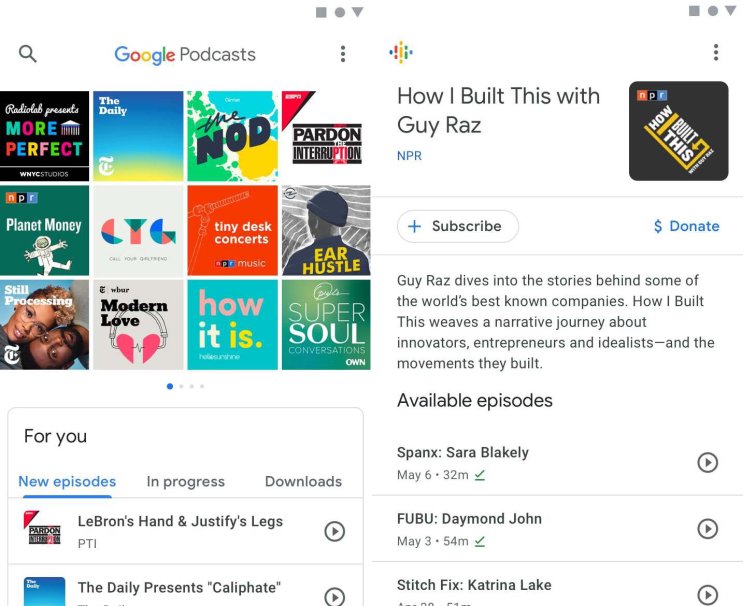 Podcasting was one of the breakout trends in 2017, and 2018 is already shaping up for more of the same. A number of podcast-focused startups have raised VC cash this year, adding to the mountain of similar investments in podcasting last year.

Edison Research published a recent 2018 Infinite Dial report on podcast listening trends that suggests 26 percent of Americans listen to a podcast each month, up 2 percentage points on last year. And the number of podcasts users listen to has risen on average to seven per week, up from five last year.

Apple has offered its own dedicated podcast app since 2012 and recently rolled out its podcast analytics platform so creators can access more data about how audiences are consuming their podcasts. That Google is now entering the fray with its own podcasting app should come as little surprise, though it’s perhaps a bit surprising that it has taken this long.

“Over 2 billion people use Android, and we believe Google Podcasts can help double worldwide podcast listening over the next couple of years, primarily through seamless integration with Google Assistant and AI-powered features — starting with personalized recommendations,” Reneau-Wedeen said.

As Google continues to expand its new YouTube Music service into more markets, today’s launch answers a key question regarding the company’s podcasting intentions. There was zero mention of podcasts in any of the company’s marketing spiel around YouTube Music — now we know for sure why that was.

As for Google Play Music, the company’s other audio-focused app, Reneau-Wedeen added that there will be no changes to the existing podcasting experience there.