Google has today announced plans to shine a light on local news reporting with the introduction of a new Local Source tag in Google News. 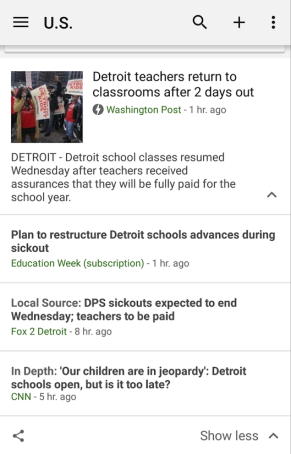 The Internet giant has long appended articles in Google News with additional data to help users home in on the best and most relevant articles — for example, it may tag an article as “In-Depth” in the search results for those seeking more substantial coverage. Now, it looks as though Google News is seeking to appease regional publications that have struggled to compete with the major media companies online. It’s doing this by highlighting the original sources of local stories that subsequently become national or international talking points.

“Local news publishers play a critical role in covering the stories that impact us every day in our cities, schools and neighborhoods,” said James Morehead, product manager at Google News, in a blog post. “Local reporters are often members of the communities they serve, bringing additional context and perspective to a story.”

While neighborhood newspapers and local bloggers often do much of the spadework to unearth a scoop of much wider importance, their coverage can often become buried under the might of national broadcasters and global media outlets. Appending “Local Source” to a Google News result may be a minor fix, but it at least gives those who are seeking local perspective on a major story an easier route to those sources.

Google says that Local Source articles are highlighted automatically by analyzing locations a publisher has written about historically and comparing that data to a current news story’s location and other relevant details. The new feature is live now globally across Google News.