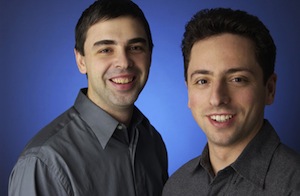 The company’s revenue during the first three months of the year grew 27 percent compared to the same period in 2010, to $6.54 billion, which tops analyst predictions of $6.32 billion. Yet earnings-per-share were actually weaker than expected — $8.08, rather than the expected $8.13.

Rising expenses seem to be largely responsible for the earnings miss. Google’s operating expenses for Q1 were $2.84 billion, making up 33 percent of revenue, compared to $1.84 billion and 27 percent of revenue a year ago. Chief Financial Officer Patrick Pichette said the increased expenses came primarily from payroll and advertising. (I covered the spending, particularly the ad spending on Chrome, in more detail in a separate post.)

Other highlights from the earnings:

Although Larry Page (pictured above with co-founder Sergey Brin) was announced as the new chief executive during Google’s last earnings call, he didn’t officially take over until the end of Q1.