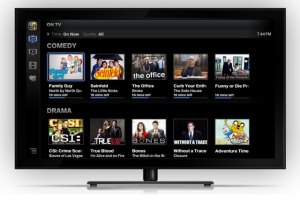 Google has asked the Federal Communication Commission (FCC) for permission to use an undisclosed new “entertainment device” in four major cities over the next six months.

The information came from a FCC application Google submitted in December, which was uncovered by Gigaom. The mystery device will connect to the Internet over a home Wi-Fi network and then sync up with other (probably mobile) devices via Bluetooth.

While details of what the actual device is aren’t included in the application, it almost certainly has something to do with Google TV. Using the data transfer process described in the application, the device could be a way for people to grab video content from the Internet and distribute it to all the other mobile devices. The benefit of transferring content in this way would be that people wouldn’t be exhausting their broadband Internet connections, meaning it wouldn’t slow down the connection for anyone else on the network. Also, people with wireless plans wouldn’t have to worry about hitting data caps just because they wanted to download a few episodes of a TV show once or twice a week.

The application indicates that over 250 devices will be used in Mountain View, Calif.; New York City; Los Angeles Calif.; and Cambridge, Mass.

We’ve pasted the full description from the FCC application below. Let us know your theories in the comments section.

Testing throughput and stability of home WiFi networks using an entertainment device. Testing will include functional testing of all subsystems, including WiFi and Bluetooth radio. Users will connect their device to home WiFi networks and use Bluetooth to connect to other home electronics equipment. This line of testing will reveal real world engineering issues and reliability of networks. The device utilizes a standard WiFi/Bluetooth module, and the planned testing is not directed at evaluating the radio frequency characteristics of the module (which are known), but rather at the throughput and stability of the home WiFi networks that will support the device, as well as the basic functionality of the device. From this testing we hope to modify the design in order to maximize product robustness and user experience. Utilizing the requested number of units will allow testing of real world network performance and its impact on applications running on the device, so that any problems can be discovered and addressed promptly. All devices will be used by and registered to specific individuals (all Google employees), and Google will maintain a record of each device, so that they can be easily recalled at any time during testing and when testing is complete. The devices will be tested at Google facilities and within employees residences in the following areas: Mountain View, CA: 37.421265 N, -122.085314 W; Los Angeles, CA: 33.995388 N, -118.477035 W; Cambridge, MA: 42.362754 N, -71.088023 W; and New York, NY: 40.741872 N, -74.004579 W.