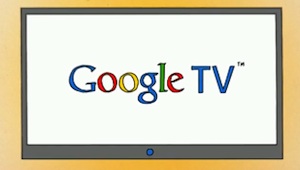 Google confirmed widespread speculation today by demonstrating a new service for accessing the Web and other applications on your television. Rather predictably, it will be named Google TV, and it will be based on Google’s Android smartphone platform.

Google’s Rishi Chandra told the audience that there have been previous attempts to bring the web to your TV that have only seen limited adoption. The problem, he said, was that they “dumb down” the Web. Referring to the early WAP technology for the mobile Internet, Chandra declared, “It’s WAP all over again.”

Given that this is a Google product, one of the central parts of the Google TV experience is a “quick search” box. Those searches now integrate Web results, so that relevant TV channels and programs are mixed in with websites. Google is releasing details today that will allow developers to customize their websites for viewing on a TV. Android applications will also be available in Google TV.

Chandra noted that this isn’t just about viewing online video on your TV, either. Your television could become a viewer for photos on Flickr, or a way to play games from the Web, for example.

Google TV will be accessible via set-top boxes and other devices that hook up with standard cable- and satellite-connected televisions. The first devices are scheduled for fall 2010, and will come from Sony and Logitech. They will include chips from Intel.