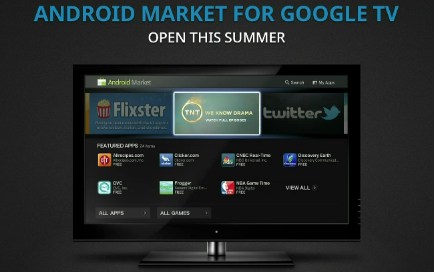 At Google’s I/O developers conference today, the company confirmed that Google TV will receive a major upgrade to Android 3.1 this summer, as well as access to apps in the Android Market.

That’s good news for the handful of Google TV users out there (myself included) who have been waiting for apps and a more polished user interface. It’s also a sign that Android 3.1 and beyond — which also includes improvements for tablets — will finally let Google fulfill its ambitions of delivering Android on practically any device.

Mike Cleron from Google’s Android development team says that developers will be able take advantage of the existing Android 3.0 “Honeycomb” SDK to create apps for Google TV. He also said that new Google TV products are on the horizon from Samsung, Logitech (the first true GTV partner), Vizio and Sony.

The addition of apps could breathe new life into Google TV, which has thus far relied on HTML5-powered websites optimized for its interface. In my review, I was impressed by the potential of Google TV, and it seems like the summer update may finally unleash that potential.

Hopefully by this summer, Google will be able to offer cheaper GTV hardware — perhaps around $100 — that can compete with Roku’s cheap internet video devices.