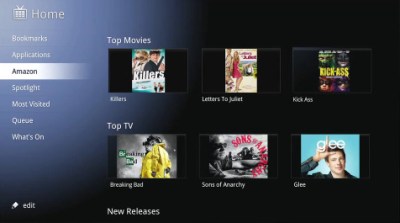 Google has been fairly quiet on the progress of Google TV since it was announced five months ago, but now the company seems ready to spin up its hype machine once again.

In a blog post today, Google TV product manager and developer Ambarish Kenghe listed several content partners the company has attracted — including HBO and NBC Universal — and offered a glimpse at some Google TV applications (see video below). The company has also finally launched an official website for Google TV.

In addition to Netflix and Amazon Video on Demand support, Google reports that content partners are optimizing their websites for Google TV support. Turner Broadcasting, for example, has spruced up its TBS, TNT, CNN, Cartoon Network, and Adult Swim sites. HBO has also ensured that its HBO Go site, which offers subscribers the ability to watch movies and TV shows online, will work with the platform.

Google also announced a few new apps: NBC Universal has created a CNBC Real-Time app which lets you access stock and news feeds while watching CNBC content, and the NBA has also created an NBA Game Time ap which lets you follow scores and highlights in real-time. The company has also worked with technology and media companies to optimize sites “like The New York Times and USA Today; music sites like VEVO, Pandora and Napster; information networks like Twitter; and online networks like blip.tv.”

To reiterate, Google TV is the company’s stab at bringing the Web — and in particular Web video — to TV screens. In addition to the upcoming Logitech Revue box, the company is working with cable/satellite providers, and TV manufacturers, to integrate Google TV into their products. I argued last month that Google TV remains far more compelling than the new Apple TV because it’s more ambitious and will eventually be available to consumers as part of their default TV experience.

We’re going to be hearing much more news about Google TV over the next few weeks. Logitech is holding an event this Wednesday to show off its Revue set-top box, and Sony is officially announcing its Google TV-powered TV sets next week.