Almost a year after its launch, Google TV owners are finally beginning to receive a major update that will dramatically improve the service with the addition of apps, a cleaner interface and more. But will the update make a dent in the many criticisms — sluggishness, and a lack of web video content, to name a few — lodged against it?

After living with the latest version of Google TV for the past few weeks, I’m happy to say that the updated service finally lives up to Google’s initial promises of unifying traditional TV with web content. It’s a massive update that makes existing Google TV devices feel completely fresh and new. But new buyers will likely want to hold off until Google announces new Google TV devices before they jump aboard.

First, a bit of history: I’ve been living with Logitech’s Revue Google TV unit since I reviewed it last year, so I’m intimately aware of the platform’s existing strengths and weaknesses. But since the update was first made available to Sony’s Google TV devices, Google sent me a Sony set-top box to check out. (Google says the update should be headed to Revue units within the next few weeks.)

The first thing you’ll notice about the new Google TV interface is that it looks nothing like the original — which, frankly, was an eyesore. Gone are the ugly text menus and complicated user interface GTV users have grown to hate, and in their stead are attractive icons and a far more streamlined experience. This time around it feels like Google actually paid attention to how people use GTV, instead of just rushing it out the door.

With the new update, Google TV is now powered by Android 3.1, which opens the door for it to support Android apps. GTV’s assortment of available apps is small at the moment, but there are already some standouts like Redux, an innovative app that sorts high-quality web video into hand-picked channels. I’ve also grown quite fond of GTVBox, a tiny barebones app that supports just about every video file format I throw at it.

Google TV isn’t the first connected TV platform to sport apps — Samsung has already made a decent business of selling apps on its TVs, and Roku offers something similar with its multiple channels — but the fact that it runs Android makes it easy for developers to bring their apps into the living room.

Google has also updated some apps of its own: The new YouTube app is a vast improvement over the previous HTML5 app (which is still accessible through the web browser), and a new “TV and Movies” app compiles content available across cable or satellite, Netflix, YouTube, Amazon, and other sources. As I’ve previously written, YouTube’s upcoming original channels could be a boon Google TV owners as well.

Google TV is entirely snappier this time around, which I attribute mainly to the addition of Android 3.1. Moving around menus feels far breezier and more natural than it did on the original Google TV software. The update also brings a full version of the Chrome web browser to the platform, which loads web pages faster than the original GTV browser and is particularly adept at playing high-definition web video. Previously, visiting a site like FunnyorDie on Google TV was an exercise in frustration because of its combination of video and Flash content. Now you can easily navigate the site and play 720p HD videos without any stuttering. 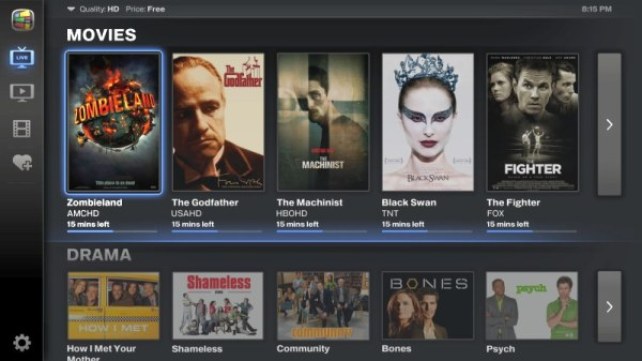 The bad: Deep DVR integration still unavailable to most

The version 2.0 update turns Google TV into a better competitor against companies such as Roku — but the service’s initial promise of completely integrating with your traditional TV service is still a pipe dream. Just as it was when Google TV launched, the only way to get the “full experience” — which includes direct access to your DVR and the ability to schedule recordings from within GTV — is by being a Dish Network customer (and spending an extra four dollars a month).

And even if you are a Dish customer, setting up the full experience remains a difficult process. After adding the Google TV integration to your monthly bill, you need to connect your Dish receiver and Google TV devices directly with an ethernet cord, then hope and pray that GTV recognizes the Dish receiver on the other end. This took multiple tries for me, and even after getting it working the connection between the two devices would occasionally drop.

The takeaway: Great for existing owners, newcomers should hold off

For current Google TV users, the update is nothing but good news. It turns Google TV into a faster and genuinely more interesting platform, while bringing Google one step closer to becoming a living room mainstay.

As Google’s performance with Android showed us, it seems to take the company about a year to gain its footing in new territory. When it launched, Android was slow and clunky, and its initial handset lineup was mediocre. It wasn’t until the release of the Motorola Droid and Android 2.0 a year later that the platform finally began to take off.

Now it’s Google TV’s time to shine. New hardware is likely close by, which is why I don’t recommend picking up one of the existing GTV devices just yet. At this point it looks like Logitech has given up on GTV, but there’s word that LG has a GTV television set in the works for CES, and I wouldn’t be surprised to see a few more devices popping up before the holidays.