Tomorrow, Apple opens preorders for its long-overdue Apple TV relaunch. Today, we got a closer look at the developer edition of the device.

Ahead of next week’s release, the Apple TV is still extremely limited. There is no gaming, no Netflix, no Siri — yet. Really, all you can do are things Apple Music or iTunes Store-related. But there are still plenty of interesting tidbits ahead of Apple’s highly anticipated release.

(Note: Apple did not send VentureBeat a developer unit, so we sought one out ourselves. Special thanks to the anonymous developer who offered us this early glimpse.)

Here are some of our first impressions, with plenty of photos and gifs for good measure. 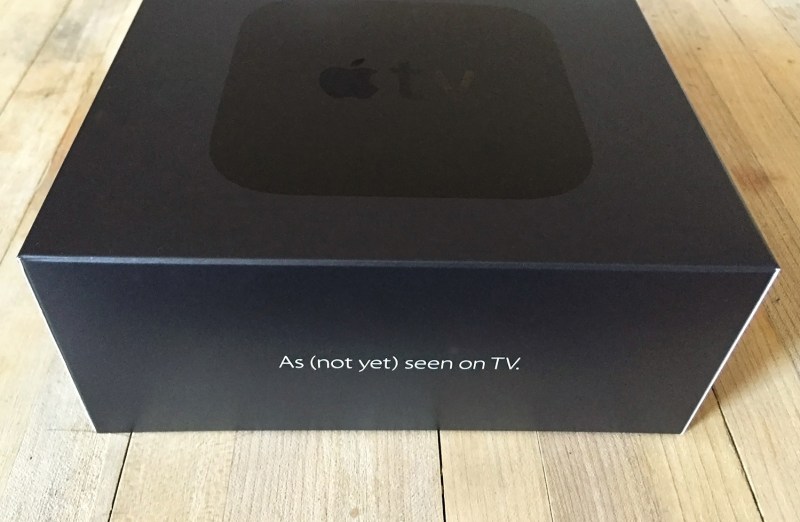 Above: A bit of cheeky copy on a mostly blank box.

Right off the bat, we’re off to a strong start. The new setup process is slick and really, really easy. Just open your iPhone, turn on Bluetooth, and you’ll be prompted to hold your phone near the Apple TV box. 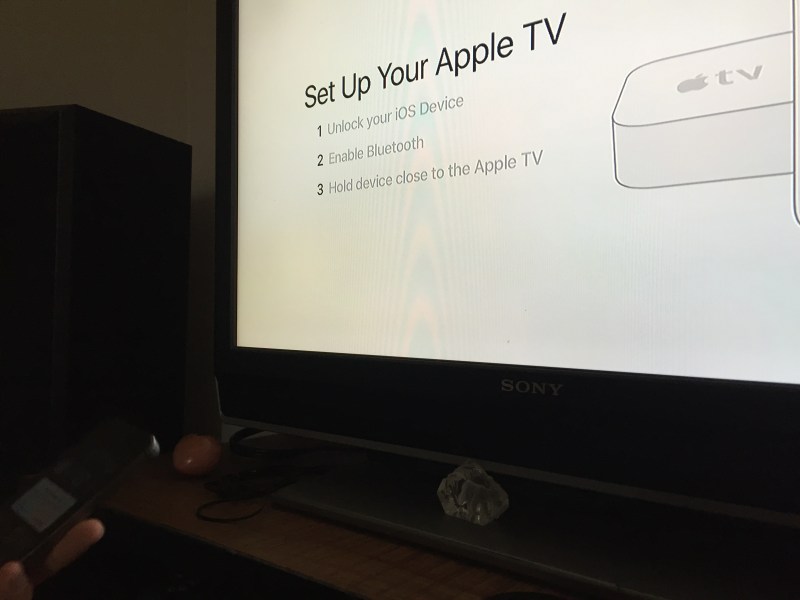 Moments later, you’re fully logged into iCloud and iTunes services. No annoying letter-by-letter manual entry of your email and password. TouchID would be great here. 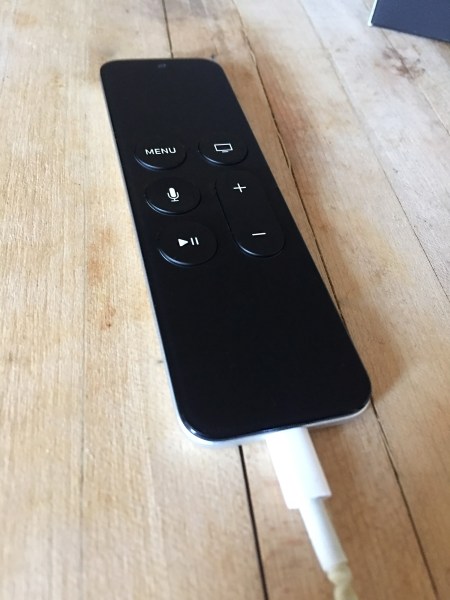 The remote is the first thing that appears radically different.

Gone are the days of the minimal two-button, forward-backward navigation. This new remote has 2 microphones, a gyroscope, volume control and a battery rechargeable by lightning cable. (I’m sure it’s just as easily lost in a couch cushion.)

It seems strange that, for all of these bells and whistles, the remote doesn’t support TouchID. I’d rather use my thumbprint to rent a movie than type in a long password. Maybe it’ll work like the setup and prompt me to use my phone. Who cares, really — watching TV is easy enough.

Anyway, it’s the touch pad that really makes this thing feel new. If you want to browse through a list of movies, a thousand individual clicks have been replaced by an easy thumb swipe. For those used to clicking a “back” button, the touch pad will take some getting used to. Your brain kind of wants to seek and press a “select” button rather than just pressing down. It functions much like a MacBook touchpad; it’s responsive, you can tweak the sensitivity, and it physically clicks.

You can also pair the remote to your television, allowing you to power everything on with a single button. 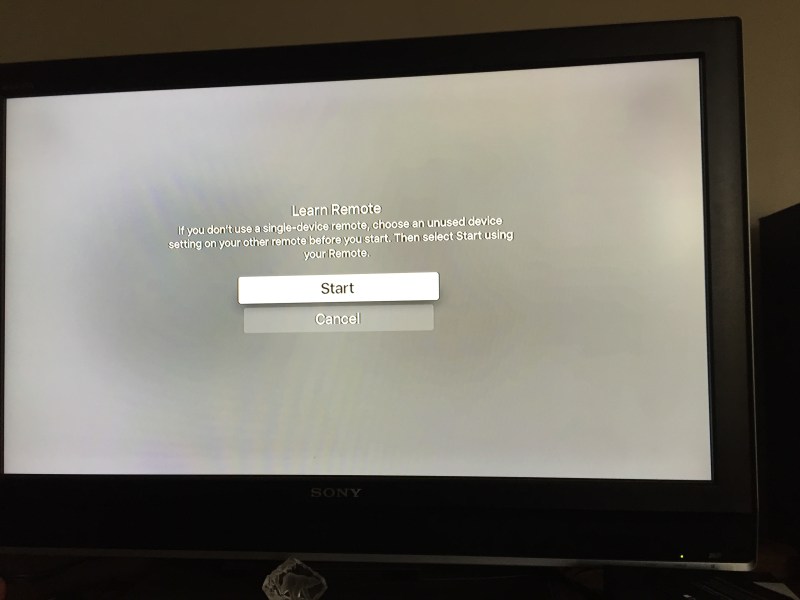 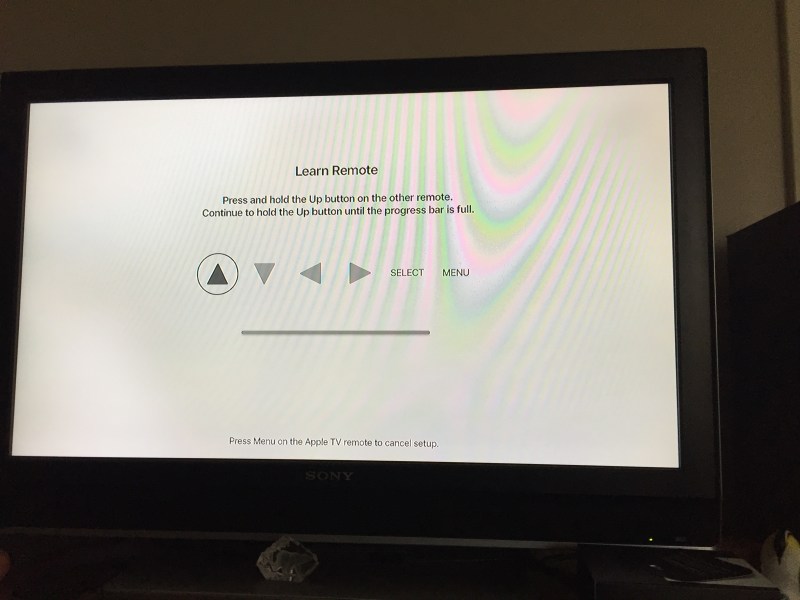 Now that we’re set up and logged in via Bluetooth, the UI is much brighter and cleaner when compared to the original Apple TV. Instead of a dull checkerboard layout on a flat black background, we get something that feels properly fussed-over and a lot more Apple. 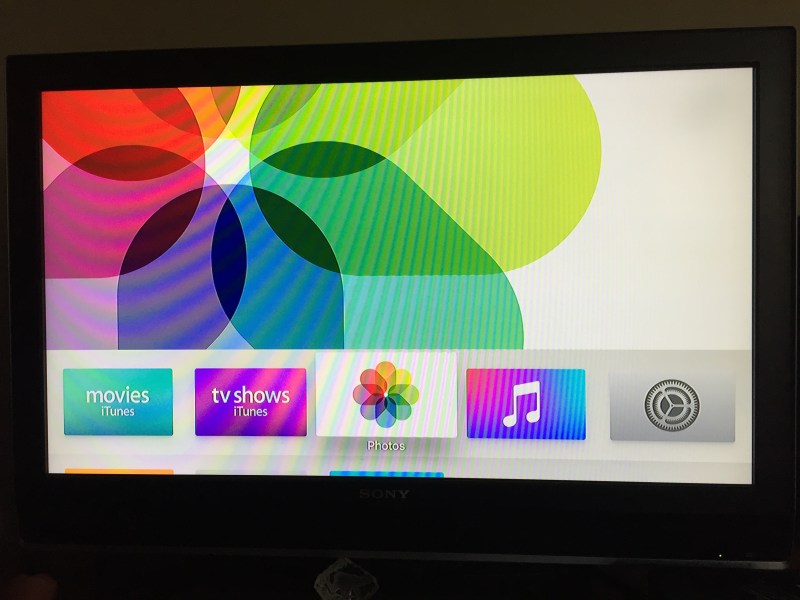 Movies and TV shows are listed much the same as in the original Apple TV, just with a better layout. 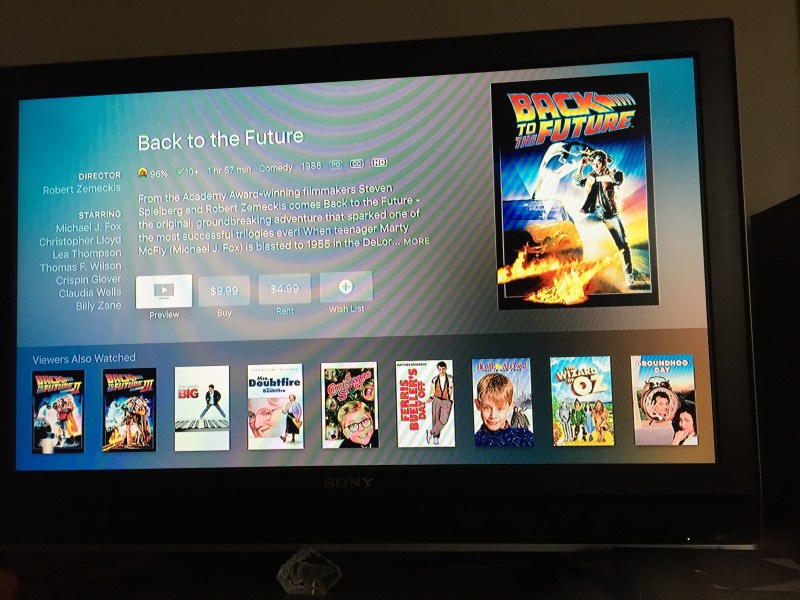 But underneath all the boilerplate, we have a ton of new information, including Rotten Tomatoes ratings, press blurbs, and parental guidance information courtesy of the nonprofit Common Sense Media. 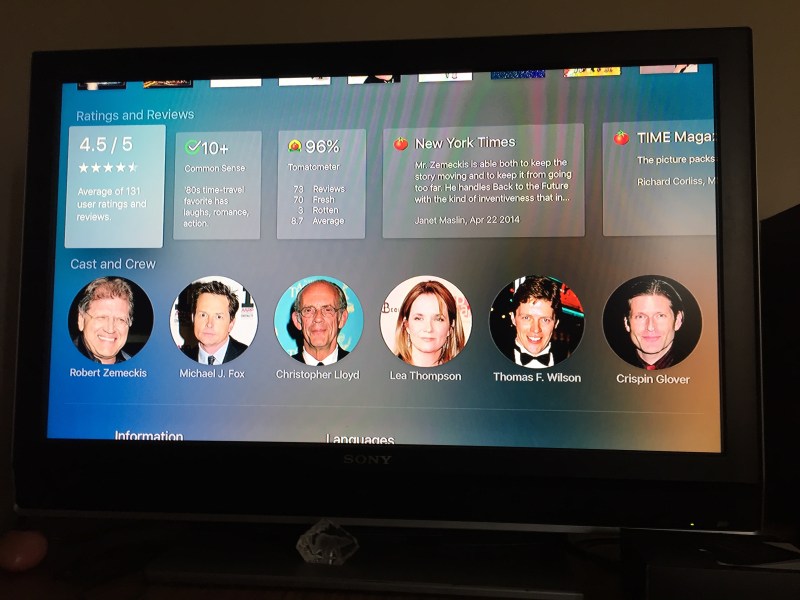 The Common Sense reviews seem quite weird. Here’s one: 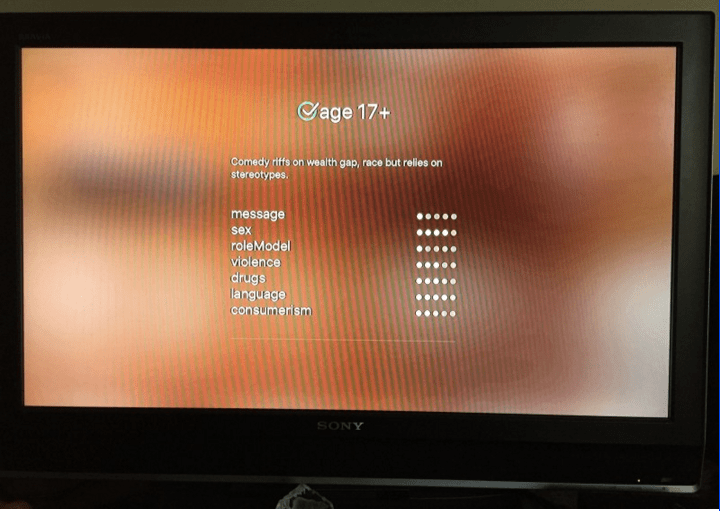 Genre browsing is also far improved — and very similar to the new multitasking environment in iOS.

These things are straight-up mesmerizing. Slow, aerial sweeps across gorgeous terrain. The clips cycle randomly and most appear to last up to 2 minutes. If this is what’s displayed while the streaming box is inactive, there is no need for my TV to ever be turned off. 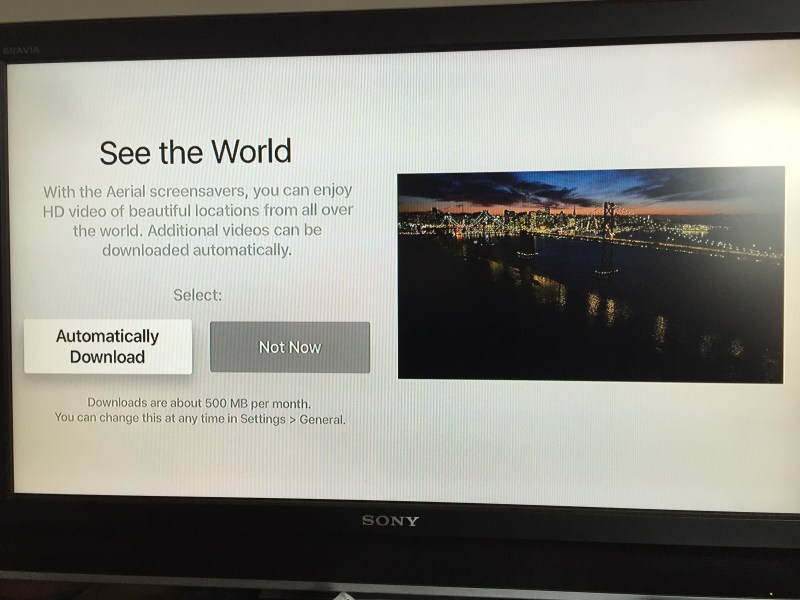 Even as a longtime Spotify subscriber, logging into Apple Music immediately made me think twice. Being able to control all of your music — with voice! — on your TV suddenly seems so appealing. The UI is consistently gorgeous; the responsive background is a particularly nice touch here. 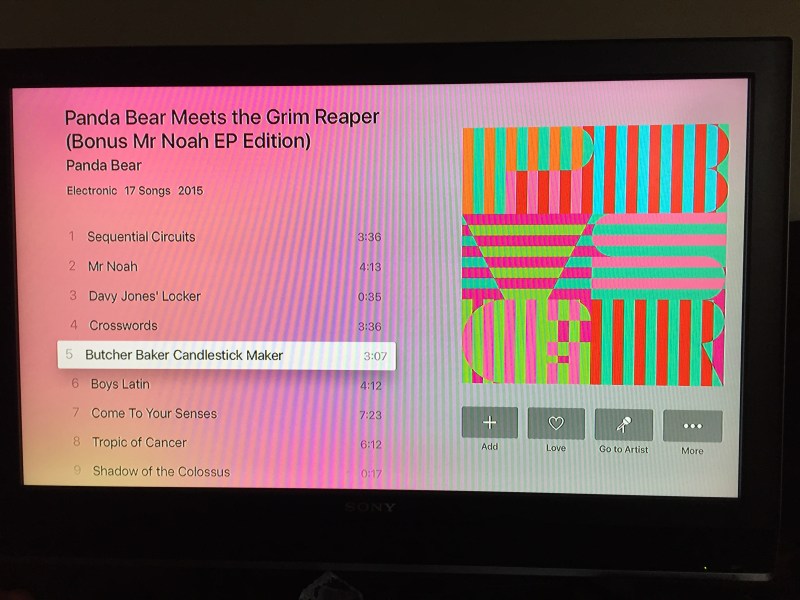 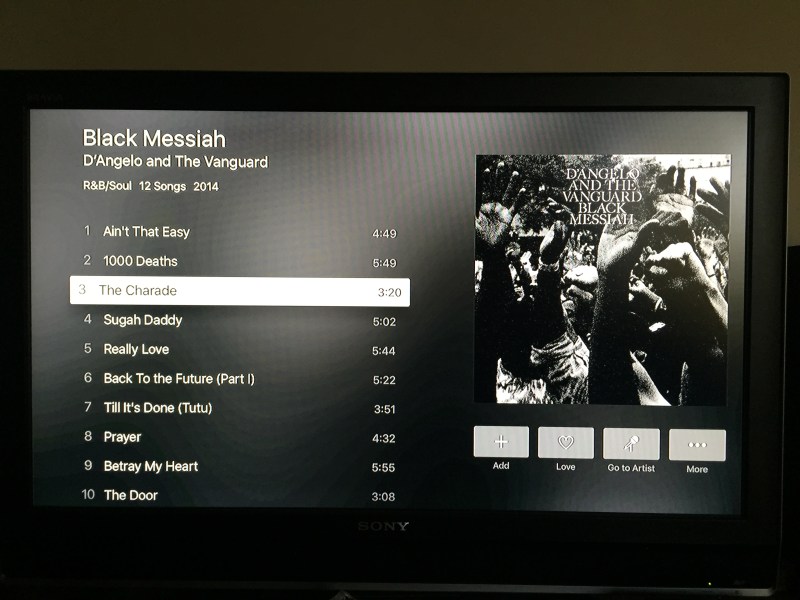 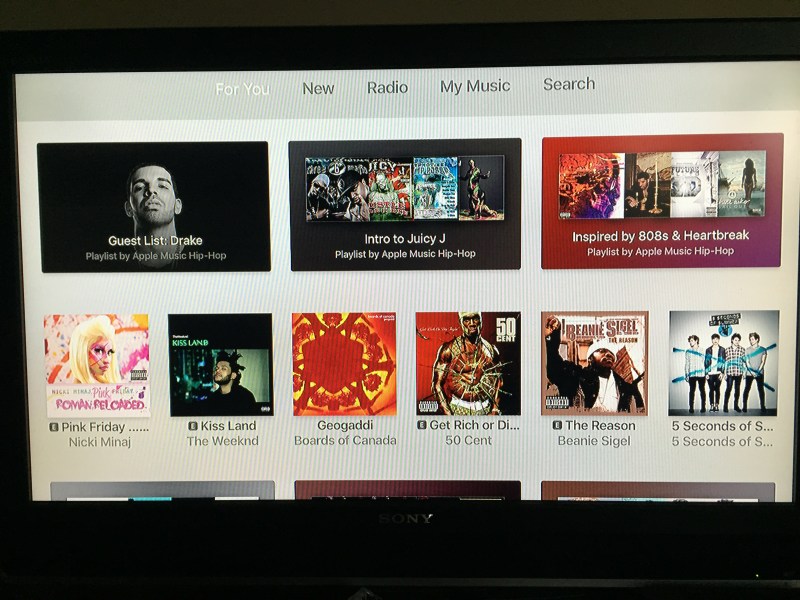 When Sonos is finally supported, I’ll have a tough decision to make.

What we don’t know

The two biggest mysteries are: Siri and gaming.

Siri is deeply integrated into the revamped TV, as we learned in September. We saw demonstrations of Siri’s ability to search actors, directors, episode names, and even cameo appearances. Other options include asking about the weather, who directed a movie, who is winning a sports game, and more.

If you miss a line of dialogue, just ask “What’d she just say?” This triggers a rewind of a few seconds and the Apple TV will even turn on closed captions for that brief scene. That’s amazing, but I didn’t see it.

Of course, Siri also has its fair share of problems. It’s buggy, it often just replies with “sorry,” and it doesn’t remember your past interactions. But if the keynote is any indication, Siri is going to be a big part of this TV.

As for gaming, the thought of a gyro-equipped Apple TV remote for gaming sounds great, although it seems like Apple isn’t pushing hard for triple-A gaming. All games have to support Apple’s remote, which significantly cuts down on inputs like joysticks, directional pads, etc. It’s no threat to your PS4 or Xbox, but it ought to make you consider trading in your copy of Wii Sports.

Despite lots of literal blank spaces, the potential for this new Apple TV is just insane.

I’m nowhere near the first to suggest that the Apple TV will soon become the hub of the connected home, but it’s finally starting to seem like reality.

It’ll get interesting when the real units and the real apps start showing up next week. In the meantime, I’m peering out of my window because I’m pretty sure that I’m being followed by Apple spies. 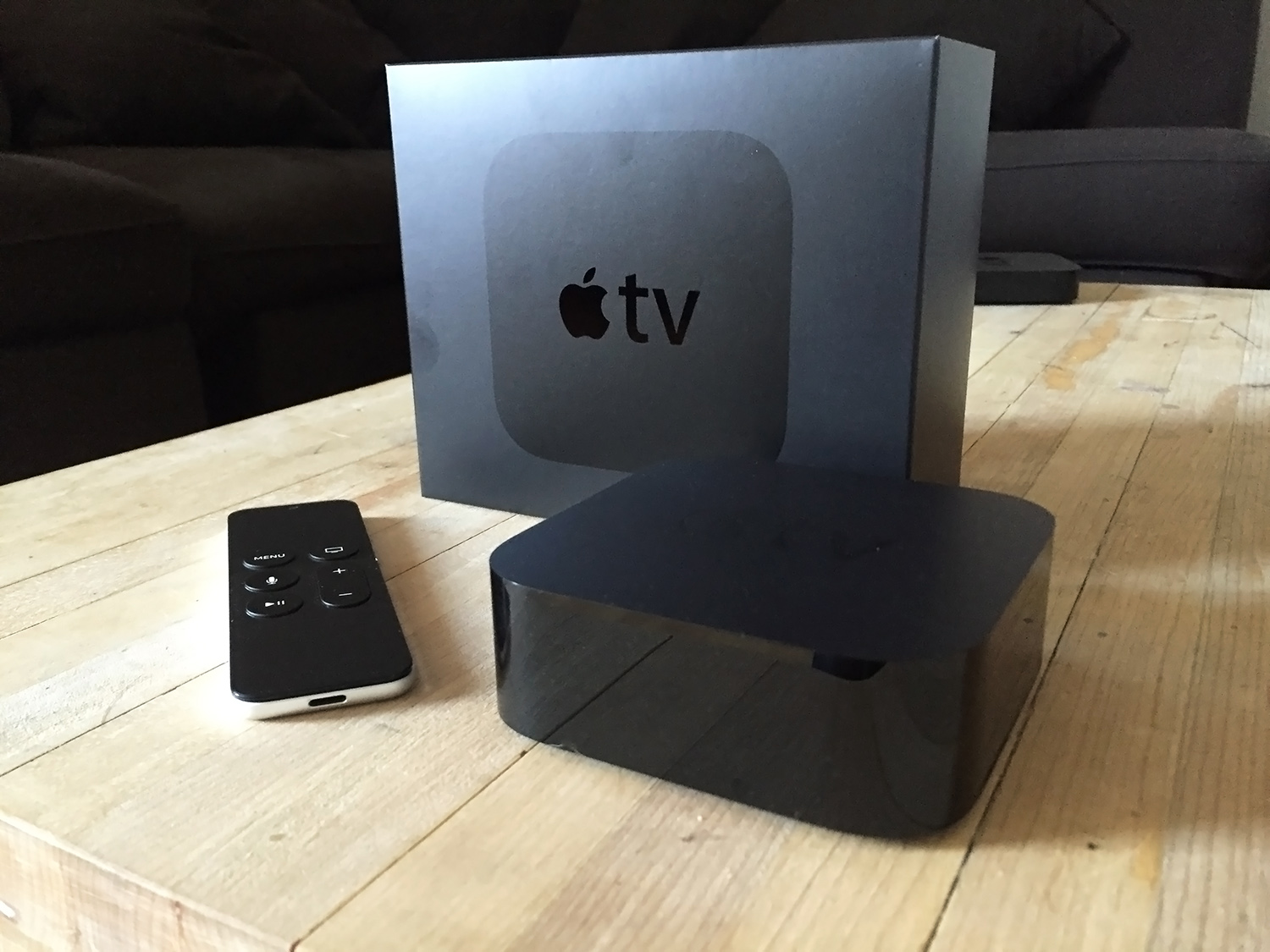