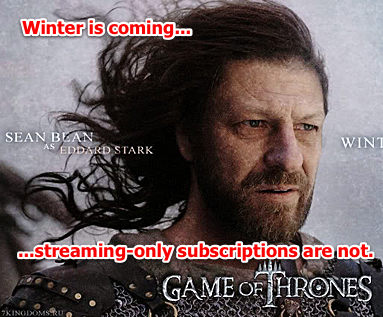 Anyone hoping for a streaming-only subscription plan for the HBO Go service will be disappointed by recent comments from the company’s co-president Eric Kessler.

Speaking at an event in New York City yesterday, Kessler said there is no chance his company will make its original programs like True Blood or The Wire available to non-cable subscribers, according to a MocoNews report.

The HBO Go service is a streaming video extension provided to people who subscribe to an HBO package through a pre-existing cable or satellite provider, such as Comcast, AT&T, Verizon or DirecTV. HBO’s business model has transitioned away from relying on licensing from movies to bring in and maintain its base of customers. Now, the company produces original content like Game of Thrones and Entourage, which is worth the elevated cable bill for some customers. However, it seems the company has no plans to make those shows available through a streaming-only subscription similar to what’s offered by Netflix.

HBO currently has about 30 million paying customers, many of who take advantage of the company’s streaming options. As VentureBeat reported in late June, a third of its customers have downloaded the HBO Go iOS app, making it a success in the eyes of the company. HBO followed up with a similar app, MAX Go, for its sister network Cinemax in August. Yet, despite all of this digital activity, the company still thinks a streaming-only option isn’t worth bothering with.

Kessler also said his company sees cord cutting as a temporary phenomenon that will go away once the larger economy improves. (Although, people might also turn to illegal distribution practices like torrents or unofficial video streams.)

But I think its inevitable that HBO will transform into a streaming-only network. Right now, the company is getting a good stream of revenue through its partnerships with cable and satellite TV providers. But as costs rise and people cancel their service, HBO will have to revisit the cord-cutting business model.