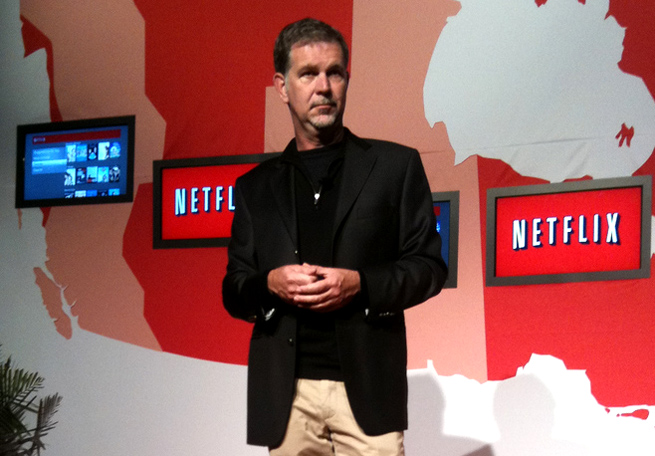 Once again, Netflix CEO Reed Hastings has struck down questions that suggested the company would raise the price of its standard streaming subscription plans beyond the introductory $7.99 per month fee that’s been successful for a few years.

But if the company doesn’t raise its fees, how does it plan to make money when its content costs and customer acquisition costs continue to rise as it grows?

Well, during today’s Q1 2013 earnings call, Hastings outlined some things that the company will and won’t be doing to start making more money in the months and years ahead.

As stated in the letter to shareholders, Netflix is planning to offer a new streaming-only plan that would allow subscribers to play up to four concurrent streams of content from Netflix’s library for $12 per month. Currently, the company allows subscribers to play two concurrent streams, but for families that have four or five people sharing a single account, this definitely isn’t feasible.

While this new 4-stream plan will go into effect soon, it doesn’t look like you’ll be gaining the benefit of hosting more than a single account per subscription. That means the recommendation engine will still suck pretty badly if you’ve got four people watching wildly different things. For example, your younger kiddos are addicted to Dora The Explorer, the slightly older kid watches Adventure Time, and you’re content to only watch educational pieces and documentaries and chances are the recommendations — as well as the account’s queue — will still be pretty chaotic.

What we do know is that the ability to have separate accounts is coming at some point. The company has even beta tested the family account plans for a select number of people. We don’t really know if the pricing will be similar to the $12 plans that were just introduced or be a little more expensive, which might be worth it considering your situation.

More original content is very likely, and you won’t have to wait

With House of Cards, Hemlock Grove, and the soon to launch Arrested Development season, Netflix is importing exclusive batches of content that Amazon and Hulu won’t get for years, if at all. The purpose is to bring in new customers and retain old ones that can’t live without those favorite shows — sort of like HBO has managed to do with Game of Thrones, Newsroom, and others. The company is also saying that its spending far less on the original content (less than 10 percent of its total content costs), which means Netflix is able to power the ship without spending a ton of cash. That means its much less  likely to have to raise prices on current subscription plans.

“We’re very excited with what’s happened with House of Cards, and with what’s coming with Arrested Development,” Hastings said during the call. “Over this year with a continuing roll out of original shows, you’re going to see a very nice redefinition and a broadening of what Netflix is to our members.”

We also know that Netflix isn’t big on the idea of making subscribers wait once a week (for 13-15 weeks) to watch an entire season of those shows. This seems to be true even though there’s obviously a benefit in some part to making people wait to get a whole season, which (in theory) would cause them to prolong canceling a subscription for 2 to 3 months rather than a single month.

Anyone hoping that Netflix will adopt a payment model used by cable companies to get free Cinemax or HBO for a short period of time might be waiting a while. During the call Hastings said the company doesn’t have any plans to partner with hardware manufacturers, television or Internet service providers on a subsidized Netflix offer — meaning someone like Roku or Comcast ends up fronting the $7.99 per month for six months when you do business with them.

“We’ve seen some companies (that advertise Netflix as a benefit) see success by offering customers a Netflix gift card,” Hastings said. However, he added that the current business model is proving quite successful, so subsidized Netflix accounts aren’t very likely.

That’s probably a pretty smart move, especially because its what’s preventing premium channel HBO from striking out on its own. HBO and other premium channels are deeply dependent on revenue that comes from cable and satellite TV providers, and as such, won’t be able to offer a stand-alone streaming service without ruining its overall business.

Netflix is still waiting to become profitable in its international markets, such as he U.K., Spain, and Latin America, but the company said it’s seeing consistent growth regardless. This is true of Latin America, which is posting some of the slowest growth because the company wasn’t prepared for how different the market was from other territories.

But that isn’t discouraging the company from sticking around until it starts making money. Hastings reiterated the company’s commitment during the call, saying that although growth is slow, Latin America doesn’t face heavy competition from others. That means the company feels like it’s still a worthy market to stay in.