With the introduction of high-end devices such as the Oculus Rift and the HTC Vive, as well as the simple ones such as Google Cardboard, virtual reality is the next digital frontier. While it’s a world that can now be practically realized, it’s not a new idea: Science fiction has long been imagining virtual worlds within imagined ones.

From the early 1950s, authors had begun to experiment with stories involving simulated worlds. Ray Bradbury’s 1951 story “The Veldt” dealt with a pair of children and a virtual nursery, while Frederik Pohl’s 1955 short story “The Tunnel Under the World” told the story of a man who relived the same day over and over, only to discover that he was trapped in a cruel marketing simulation.

Virtual reality provided a useful device for authors to examine a couple of interesting themes, territory unexplored by fiction at large. Technological advances were beginning to allow for the possibility for multiple realities: the real world, and ones which the characters could no longer distinguish between real and fake. Where reality was as tangible as the world under one’s feet and with what someone could see and feel, technology made everything questionable. Authors didn’t just explore their characters being manipulated: They began to question the very notion of reality itself.

James Tiptree Jr.’s 1973 story “The Girl Who Was Plugged In” is a good example of the manipulation that authors forecasted in their stories. While it doesn’t directly predict the rise of virtual reality, it does act as an important precursor to the entire cyberpunk genre. 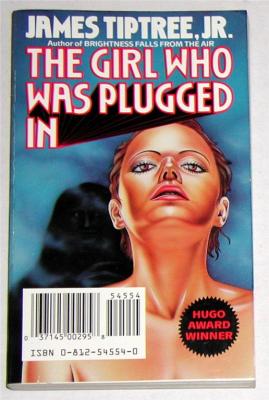 In it, a woman named Philadelphia Burke suffers from pituitary dystrophy, and is given a new opportunity in her life after she attempts to commit suicide. In this future world, remotely piloted “gods” are used in place of advertisements:

Look around. Not a billboard, sign, slogan, jingle, skywrite, blurb, sublimflash in this whole fun world. Brand names? Only in those ticky little peep screens on the stores and you could hardly call that advertising.

In this world, the ruling corporate interests manipulate the population of consumers by strategically placing these perfect people in media to use products and encourage people to buy them. The body is a simulation for the people who surround it, but also for the girl plugged into it, who gets to experience this artificial life.

“The Girl Who Was Plugged In” was a major work from its author, who earned a Hugo Award for best novella in 1974, and it would become a major precursor to a subgenre of science fiction that would change the idea of virtual reality forever.

By far the most influential work of cyberpunk fiction is Neuromancer by William Gibson. Written a decade after Tiptree’s novella, Gibson was struck by an experience that he had in a Vancouver arcade: “Even in this primitive form, the kids who were playing them were so physically involved; it seemed to me that they wanted to be inside the games, within the notational space of the machine. The real world had disappeared for them.”

Thus he began what eventually became one of the seminal works of science fiction. The story was raw, intense, and exciting: Case, a hacker cut off from the Matrix, is given an opportunity of a lifetime — carry out a job for a mysterious man named Armitage.

Neuromancer was one of the earliest and best descriptions of the burgeoning internet, understanding completely what the technology was and how it functioned before anyone even understood that it existed:

“Cyberspace. A consensual hallucination experienced daily by billions of legitimate operators, in every nation, by children being taught mathematical concepts … a graphic representation of data abstracted from the banks of every computer in the human system. Unthinkable complexity. Lines of light ranged in the nonspace of the mind, clusters and constellations of data. Like city lights, receding…”

Gibson not only understood and apparently predicted how the internet would eventually work, but went another step further and imagined exactly how someone might enter and interact with it, in one of the more relevant and vivid descriptions of the technology, captured as Case enters the Matrix:

And flowed, flowered for him, fluid neon origami trick, the unfolding of his distanceless home, his country, transparent 3D chessboard extending to infinity. Inner eye opening to the stepped scarlet pyramid of the Eastern Seaboard Fission Authority burning beyond the green cubes of Mitsubishi, Bank of America, and high and very far away he saw the spiral arms of military systems, forever beyond his reach.

It’s hard to overstate the importance of Neuromancer to the science fiction and technology fields. Gibson wasn’t the first to visualize the idea of entering a digital world — director Steven Lisberger did that with his 1982 film Tron — but Gibson did it with a gritty sense of cynicism that has had a far larger impact, and that has continually influenced the field in the years since its publication.

A little under a decade after Gibson changed everything, another novelist was poised to change how we envisioned cyberspace: Neal Stephenson. In 1992, the author published his third novel, Snow Crash, a gritty cyberpunk tale set in the 21st century, where private interests have largely taken over the world. Set in Los Angeles, the plot features Hiro Protagonist, a metaverse player who stumbles on a dangerous new drug called Snow Crash, a virus that infects both the player’s virtual avatar and their real body. 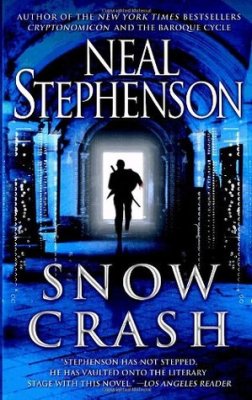 Stephenson’s world builds on the ideas with which Gibson had prefigured in the genre. Cyberspace and virtual reality in many ways were a means of escape, providing alternatives not offered by the real world, rather than additions to reality. In Snow Crash, he lays out the world featured in his novel, outlining not only the very recognizable technology, but the appeal and motivations for why people would use it:

Through the use of electronic mirrors inside the computer, this beam is made to sweep back and forth across the lenses of Hiro’s goggles, in much the same way as the electron beam in a television paints the inner surface of the eponymous Tube. The resulting image hands in space in front of Hiro’s view of Reality….

So Hiro’s not actually here at all. He’s in a computer generated universe that’s drawing onto his goggles and pumping into his earphones. In the lingo, this imaginary place known as the Metaverse. Hiro spends a lot of time in the Metaverse. It beats the shit out of the U-Stor-It.

Stephenson’s book best imagined how virtual reality might work, but also showed off the opportunities that it presented for people. Much like how Tiptree’s P. Burke found new autonomy in her physical avatar, Hiro Protagonist could become someone entirely different in the virtual world.

This is a concept shared by many cyberpunk / virtual reality novels: Just look at the plot of Ernie Cline’s 2011 novel Ready Player One, where Wade Watts becomes a legendary egg hunter in the OASIS, a limitless virtual world of pop culture references and quests. Thomas Sweterlitsch’s debut novel Tomorrow and Tomorrow takes a slightly different track, recreating an interactive environment of a city that had been destroyed, playing with the idea that there is more to VR than the amusement of the players.

What has set these novels apart from their peers is the ability of their authors to comprehend not the underlying technology itself, but how it is utilized by its users. Moreover, these authors have largely imagined not just their virtual worlds, but the real world that supports their use, depicting bleak, corporate-driven universes that feel not too unlike our own.

While virtual reality is just in its infancy, it’s worth paying some mind to the works of these authors (and others!) to understand not only where virtual reality’s roots lie, but where their creators believed we were headed.