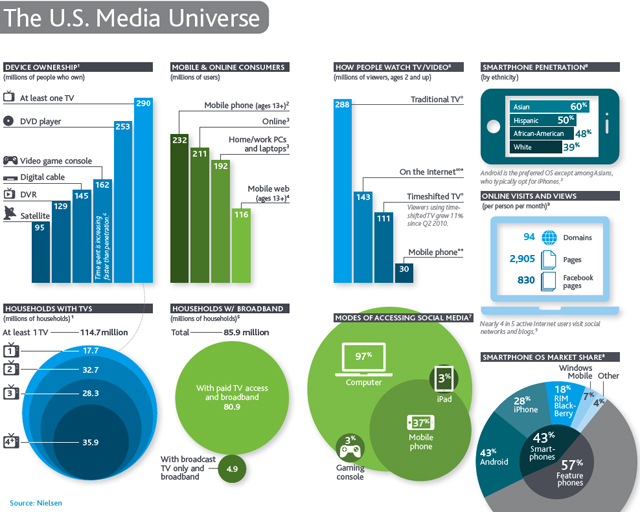 How do you watch your favorite TV shows? Chances are, you’re still using that traditional TV in your living room, but according to a report from Nielsen audiences are increasingly going mobile to consume videos and television.

Nielsen released its 2011 State of the Media: Consumer Usage Report Monday, which looks at all the data collected by the company over the course of the past year to paint a bigger picture of how we consume media, and what devices we’re using to do it.

First, it looks at what devices we’re using, and good old-fashioned set-top TVs are still the standard. In 2011, 290 million people in the U.S. had at least one TV, and 85.9 million homes had a broadband connection. For 288 million people, traditional TV is still the main method of watching TV and videos. Internet was next, with 143 million people watching over home or work computers, followed by 111 million viewers who watched timeshifted TV (programs recorded to watch later), and 30 million people who watched on their mobile phones. This divide between set-top and new devices was even larger when broken down by how much time was spent watching TV.

Next, the study zoomed in on online habits to look at how people are consuming media on their non-TV devices. Streaming service competitors Hulu and Netflix are consumed differently by viewers. Hulu is more likely to be watched directly on a computer (89% of users) or on a computer connected to a TV (20% of users). The majority of Netflix subscribers are streaming over a video game console (50%), then computers directly (42%) and on a computer connected to a TV (14%). Only a tiny sliver of people use the services on an Internet enabled TV.

Online video services break into two sections, with sites that offered bite-sized videos getting more unique viewers, and sites with full shows capturing more eyeball time per month. YouTube gets far-and-away the most unique views, with 126.5 million hits, and Netflix gets the most viewing time, with 10 hours a month per person.

Finally, Nielsen expands its horizons and looks at tablet and smartphone habits. If they have a tablet, people love to multitask while watching TV, and they do it almost as much during the real programming as during ads. Most often, we check our email, look up unrelated information online and hit the social networks. Many viewers also look up information related to the shows or commercials they see on TV.

The study looked found that 51 percent of people don’t mind getting ads on their apps if it’s free, and people (unshockingly) prefer free apps. The average person has 33 apps on their smartphone or tablet, a mixture of paid and free. The majority of apps are games, followed by social networking and music apps.

Here are some more stats from the study: