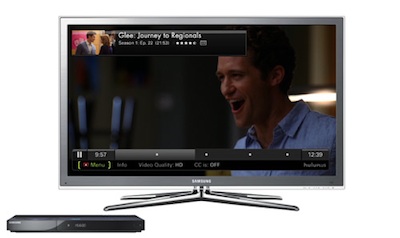 Kilar emphasized that Hulu Plus won’t replace the free version of Hulu but is instead an “incremental and complementary” extension. Basically, it fills in some of the service’s gaps. Until now, Hulu viewers could only watch the five most recent episodes on most shows. With Hulu Plus, they’ll be able to see the full seasons of all Hulu shows, as well as all episodes of select series like The X-Files, Buffy The Vampire Slayer, Arrested Development, and Desperate Housewives.

In the past, Hulu has restricted access to its content from set-top boxes and mobile devices, reportedly due to hesitance from its content providers. Now it’s moving beyond PCs and Macs, but in a limited way, as a downloadable application for paid subscribers. As part of the announcement, Kilar said the company is launching a Hulu Plus application for Apple devices — namely, the iPad, the iPhone 3GS and 4, and the third-generation iPod Touch. The company is also releasing an app for Samsung’s Internet-connected TVs and Blu-ray players, and Playstation 3 support is coming soon.

The company is rolling out Hulu Plus invites in waves, Kilar said.

We believe that any lasting solution to the challenge of making TV show discovery and viewing dramatically easier has to work for all three of our customers, and those are our end users, our advertisers, and our content suppliers.

With Hulu Plus, we believe we’ve met that goal. For our end users, we’re offering them the most convenient way to access their favorite shows, on devices they love, in high definition, at a fair price. For our advertisers, who allow us to keep our Hulu Plus price low with the support of ad revenue, we offer one of the world’s most effective advertising platforms, with the ability to speak effectively to users across a variety of devices, anywhere they happen to be. And finally, for our content partners, we offer revenues that compensate them fairly for bearing the cost of producing the shows we love.