New Hulu CEO Mike Hopkins just posted a report that shows revenue grew to upward of $1 billion for 2013, which is up significantly from $695 million in 2012. Its paid Hulu Plus subscription service also hit 5 million subscribers, up about a million since April.

The news comes after a turbulent year for the streaming video site, which saw longtime CEO Jason Kilar depart along with many of the original executives. The year also saw the second failed attempt by Hulu owners (21 Century Fox, Disney, and Comcast) to sell the company for around $2 billion. 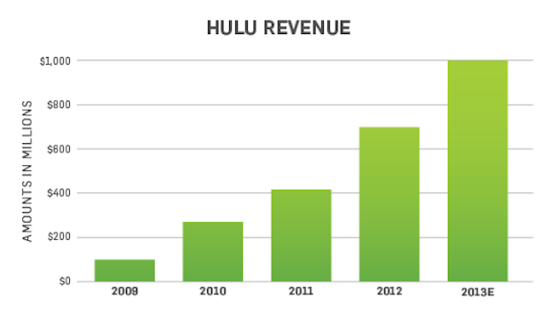 “When you think about the fact that Hulu first launched out of beta in 2008, it’s quite an impressive feat to scale the business from zero to $1 billion over the course of just six years,” Hopkins wrote.

And while that may be true, Hulu’s larger challenge over the next few years will be in making sure its owners don’t cannibalize Hulu by delaying new TV episodes from appearing on Hulu while also producing its own line of original content that rivals both Amazon Prime and Netflix — two services that are very much against showing ads that most viewers seem to really hate anyways. (Hopkins did, however, point out that Hulu did debut 20 original series this year and plans to double that number “over the next few years.”)

Yet advertising is a huge part of Hulu’s business strategy. Hopkins said the company had over 1,000 top brands advertise through the service (up 15 percent over last year). Also, those ads don’t appear to have negatively impacted how much content people are watching either.

The company claims that viewers streamed over a billion hours of video in 2013, with an average viewing time per session (the amount of time people watch a show without pausing or taking a break) at 50 minutes. It’s worth noting that Hulu doesn’t actually specify if it’s including the time people spend watching advertising within those figures, but I’m assuming it does.