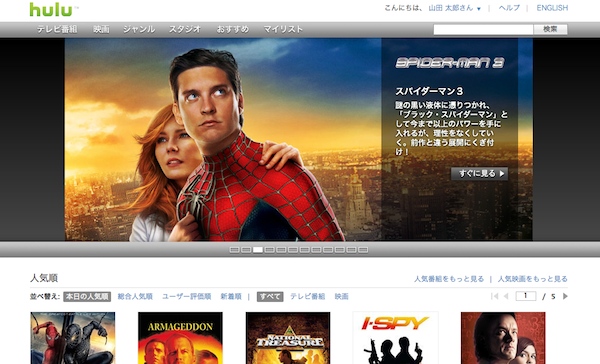 Hulu may soon be snapped up in an acquisition, but in the meantime the company is continuing to expand its presence. On Thursday, the streaming video service launched a premium service in Japan that offers full-length movies and complete seasons of TV shows.

Japan marks Hulu’s first expansion outside of the United States, and we first heard the company planned to launch there in mid-August. The company and competitor Netflix have both expressed a strong desire to be available outside of North America, but moving into other countries takes capital and time to secure individual rights agreements. Netflix has also announced plans to launch in 43 Latin American and Caribbean markets and in some parts of Europe.

Hulu in Japan closely resembles Hulu Plus in the U.S., but at about $19 a month (¥1,480) the service is relatively more expensive than Hulu Plus’ $7.99 a month. The Japanese offering doesn’t include a free ad-supported option like there is in U.S., although users can try the service for one month for free to test it out.

Subscribers will be able to watch Hulu content from many partners like CBS, NBC, Sony, Disney and others on their computers, connected TVs, smartphones and tablets.

The movie and TV selection appears to be heavy on American content rather than Japan-specific. Some of the full-length films include Pirates of the Caribbean, Armageddon, Men in Black, Troy, and As Good As It Gets.

When Hulu originally announced plans for Japan, the company said it was an attractive market because there is strong broadband penetration and because Japanese consumers are “passionate” about online video content. We’ll see just how passionate these users are after they’ve had it for a few months.